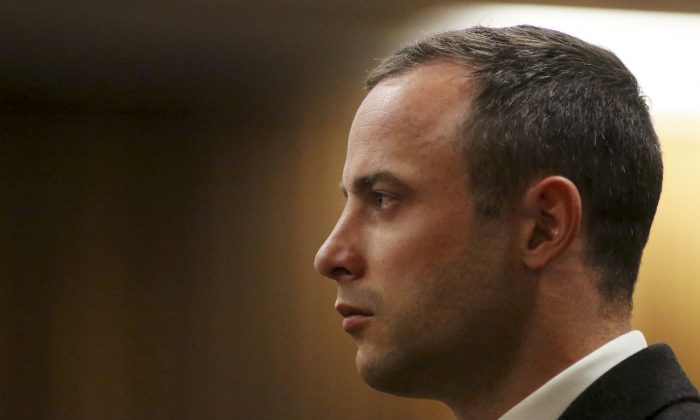 Oscar Pistorius listens as a court ruling is handed down that he would undergo psychiatric evaluation in Pretoria, South Africa, Tuesday, May 20, 2014. (AP Photo/Siphiwe Sibeko, Pool)
Entertainment

The Oscar Pistorius trial is got an examination from CBS on its “48 Hours” show, with showrunners asking why the Olympic star shot and killed his girlfriend, model Reeva Steenkamp.

“Unlike the O.J. case, it’s not a matter of if Pistorius did it,” Susan Zirinsky, the executive producer of “48 Hours,” told the NY Daily News. “It’s a matter of why.”

“Oscar is not a cold-blooded murderer,” Mike Azzie, a friend of Pistorius, said. “What happened was a tragedy. No one will ever know what was the cause of it or how it happened,” Azzie says. “And he feels the family’s pain. He genuinely feels pain for her family.”

Zirinsky said she was hesitant to cover the case, saying it was difficult to get interviews.

“There were a lot of things that were troubling about this case,” said Zirinsky, according to the Hollywood Reporter. “Was he in a rage? Was it celebrity gone bad? So I thought, if I don’t get the main interviews because I’m not going to pay for them, I’m going to find a way to do this show without them. Somebody will talk to us that doesn’t have to be paid.”

Currently, the trial is on break after a psychiatrist said Pistorius has generalized anxiety distorder and needs to be evaluated.

Dr. Charles Sophy told HLNTV a few weeks ago that doctors will be able to tell if he has a disorder or not. “Most of the traits that exhibit themselves for a generalized anxiety disorder will come out in things that not only will be tested for in psychological testing, such as concentration, pulse control, mood, those kinds of things,” he said.

“They’re also going to be looking at things like his sleep.And is it good sleep, is it continuous sleep, does he have an issue with his sleep? His eating, his energy level. The kinds of things that go through his head–is he able to be productive, or s the anxiety to a level that it almost paralyzes him through the day. There’s definitely clear criteria,” he added.