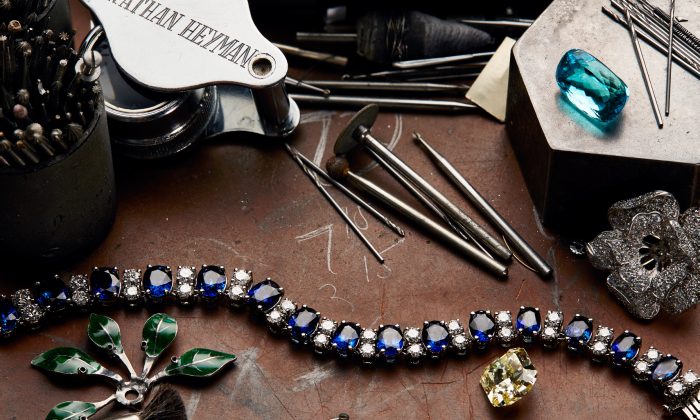 NEW YORK—Jewelry-industry insiders know the name Oscar Heyman, a company that has been meticulously crafting high-end jewelry in New York for many of the world’s most renowned retailers—Tiffany & Co.; Cartier; Harry Winston; Van Cleef & Arpels; Shreve, Crump & Lowe; and Black, Starr & Frost, among others—since 1912. Perhaps it’s time for the rest of the world to catch up.

Oscar Heyman’s business model is based on a simple principle: It’s entirely autonomous, and, with the exception of cutting diamonds, it maintains in-house production of jewelry from inception through completion. In fact, elite jewelers have turned to the reliable jeweler for several needs: extra skilled hands to manufacture their own jewelry, knowledge to tackle a particular jewelry-making technique, or sourcing the gemstones their miniature masterpieces require.

A family business since its founding, Oscar Heyman is now under the leadership of three descendant of Oscar Heyman, including Tom Heyman, who is also a partner.

“We love gems. The world of fine gems is a continual inspiration to us. They are so vibrant, exciting, colorful, and fun. It makes designing and creating jewelry a joy,” said Heyman, who is the third generation of his family in the business.

Oscar and Nathan, the brothers who founded the atelier, apprenticed at a workshop that produced and supplied baubles and ornaments for the Russian court jeweler Peter Carl Fabergé, proving that even the most elite jewelry houses have sourced out some of their work to highly skilled outsiders.

The brothers decided to bring their European jewelry-making techniques across the Atlantic and open a workshop in Manhattan. There, their business grew based on its distinctive designs, high-quality materials, technological sophistication, and impeccable manufacturing methods. The company acquired numerous patents for its manufacturing processes over the decades. These attributes were highlighted in Oscar Heyman’s participation in two New York World’s Fairs, in 1939 and in 1964, where some of its ornaments and jewelry were displayed.

Today, the words “made by hand” continue to fuel the passion of each artisan and technician who works in the modest Midtown Manhattan workshop, where the company relocated in the mid-’60s.

The workroom houses spectacular gems, as well as a room full of priceless finished jewelry. On display in the waiting room is a NASA medallion from the Apollo 16 mission to the moon in April 1972. Oscar Heyman made four medallions that went to the moon, included one owned by John W. Young, commander of that mission and the ninth person to walk on the moon.

In the workroom filled with natural light, 25 craftspeople—jewelers, setters, engravers, polishers, and lapidaries—work on individual parts of a piece at wooden desks fitted with tiny drawers and shelves. Wax and clay are among some of the materials used to produce a prototype of each piece of jewelry. Files, little hammers, pliers, tweezers, wooden mallets, and magnifying glasses are basic tools for the bench workers.

Beyond the stones most associated with fine jewelry—diamonds, rubies, emeralds, and sapphires—Oscar Heyman indulges in lesser known gemstones, such as alexandrite, opals, aquamarines, star rubies, star sapphires, and chrysoberyl (cat’s eye). The most unique item the company has made to date, a ring with a remarkable chrysoberyl weighing just over 32 carats, features “a truly fabulous ‘eye,’ [with] the right color and all the attributes collectors look for,” Heyman said.

But Heyman’s favorite gem is set in a recent ring in the collection, “a 19-carat tourmaline with flawless baguette diamonds cut into a frame around the center. Gorgeous!” he said.

The most unusual commission Oscar Heyman has received was from the historic JE Caldwell store in Philadelphia. Heyman made a very complicated suite, a set of three or more matching pieces of jewelry, that included four 8-carat round diamonds, a round yellow diamond, a pink sapphire, and a blue sapphire, all of the same diameter. All of these stones “could be added or removed from the necklace and used in several brooches and rings. The completed suite, with a bracelet and earrings, was designed and completed over a five-year period,” he explained.

Many of the retail stores that carry Oscar Heyman jewelry have customers both young and old, who become collectors of the brand. Heyman enjoys seeing collectors of all ages become more knowledgeable and sophisticated as they develop their own style. The young ones, of course, ensure that jewelry of this caliber is here to stay.

Isabelle Kellogg is a strategic consultant in communications and editorial content for fine jewelry, lifestyle, and life science clients.