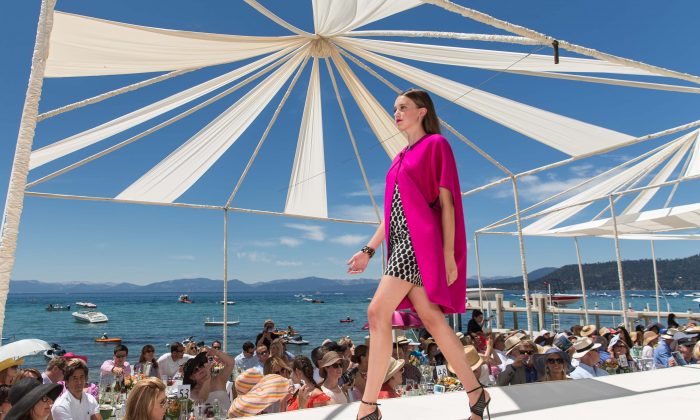 INCLINE VILLAGE, Nev.—Oscar is everywhere—from the current exhibit: “Oscar de la Renta: Five Decades of Style” at the George W. Bush Library and Museum in Dallas, Texas, to the recent show that took place on the shores of Lake Tahoe in Nevada.

A 670 strong elegantly attired and coiffured crowd, gathered on August 2 to view the “Oscar de la Renta Resort 2015 Collection.” The crystal blue waters of the lake served as the backdrop against which guests also sought to stand out in their gorgeous dresses and spectacular hats, while the men rose to the occasion in colorful sport jackets.

It was the 45th anniversary of the event that first took place in 1969 with the couture fashion show by legendary designer Bill Blass (1923–2002). De la Renta is graciously continuing his colleague’s well established and beloved tradition, attracting patrons from near and far, and selling-out a month before each event.

For the past three years Schumacher Estate in Incline Village situated on the picturesque shore of Lake Tahoe hosted the event in partnership with Saks Fifth Avenue and The League to Save Lake Tahoe and keep it blue.

While all the action took place on the elevated runway showcasing the willowy sashaying models, who for some reason never smile, I decided to focus some of my attention on the shoes that the chatty attendees wore. As a woman who owns more than 80 pairs of shoes and more than 20 pairs of boots, you may say I have a fetish.

High heels definitely reached new heights at this gathering as the crowd’s obsession with shoes was evident—even though walking on the estate’s grass as well as on the sandy shore of Lake Tahoe, the actual location of the sit-down lunch, were challenging to say the least. Guests tried to outdo each other while nonchalantly parading killer heels. Gucci, Valentino, Prada, Tod’s, Jimmy Choo, Manolo Blahniks, Christian Louboutin, Brooks Brothers, Cavalli, and of course Oscar de la Renta, were just a few labels that stood out.

Shoes, after all, are far more forgiving since we do not need to be the size of a fashion model to be able to wear them with equal glee.

The event grossed a record of $780,000 in just a few hours—a testament to its ongoing success, history, and cache, or is it cash? The live auction raised $220,000, a sum that included revenue from Oscar de la Renta’s original watercolor painting. It sold in a hotly competitive bidding for $16,000 to the jubilant Ms. Komal Shah.

“Look at the numbers: Oscar’s “New York Fashion Week” in February 2015 live auction package raised the most it ever has—$60,000!” enthused Boaz Mazor, the longtime aide-de-camp and executive at large for the fashion house. “It was one of the best shows we’ve ever produced; a real beauty,” exclaimed Mazor. “After the show, people swarmed the Saks tent to shop. A whole million of them!”

Robert Arnold-Kraft, Saks Fifth Avenue general manager was also in good spirits. “The unique setting for the fashion show and luncheon, framed by Tahoe waters, helps raise funds to keep Tahoe blue. And as far as I know, we are already booked for next summer show,” he said in his address to the crowd.

It was an idyllic summer afternoon with smiles all around and flowing champagne with the added gratification of knowing that we benefited a great cause.