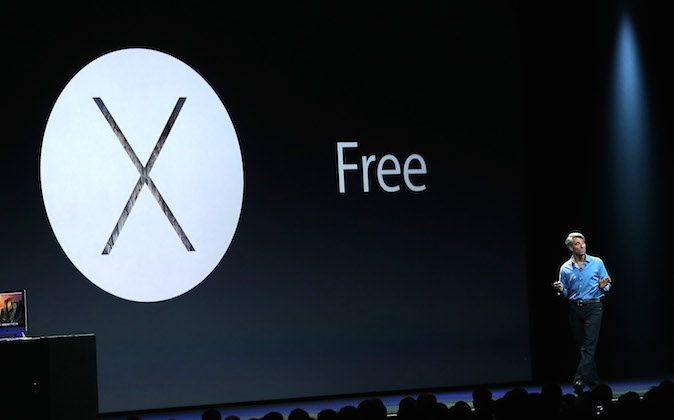 Apple recently indicate that it’s holding its next event Oct. 21, which could usher the release of OS X Yosemite, which Apple had said was coming in the fall.

It also might herald the release of new iPad models and Macbook models.

Meanwhile, here’s a rundown of the iOS 8 features, per the Associated Press:

NEW YORK (AP) — The scores of new features in Apple’s software update for mobile devices can be boiled down to one word: unity.

Google’s Android software can’t compete with iOS’ evolving unity because so many different companies manufacture Android devices, and each adds its own variables. Apple knows what goes into the few products it makes and can break down the walls between them.

The free update is available to owners of iPhone and iPad models going back to 2011, though older devices won’t get all the new features. The new software will also come with the iPhone 6 and iPhone 6 Plus, which come out Friday.

Here’s a look at those “unity” features — and why iOS 8 is worth installing:

— You can start tasks on one device and finish on another.

Let’s say you’re typing an email reply on your iPhone when you realize the message will be quite lengthy. You can pick up your iPad and finish there. With the upcoming Yosemite update for Mac computers, liking coming next month, you’ll be able to use the Mac’s physical keyboard, too.

Picking up a task on a second device is easy. Just slide up the small app icon on that device’s lock screen, be it an iPhone or an iPad. On Macs with Yosemite, click the icon on the bottom left.

For now, this capability is limited to a handful of apps, including Apple’s Maps, Calendar, Mail, Messages and the Safari Web browser. And when you try to open a Web page on a second device, you still have to scroll down to where you were. With Maps, on the other hand, it takes me to the location I was viewing on the other device.

This feature, known as Handoff, will be more useful once outside developers take advantage of it. LG and Samsung have offered similar integration of their phones and tablets, but neither does it as extensively.

— You’ll be able to use your iPad or Mac to send texts or make phone calls.

Currently, you can send text-like messages from iPads and Macs with the Messages app, but the recipient also needs Messages. That excludes Android users. With iOS 8, those iPad and Mac messages will get relayed through the iPhone, so you can reach any other phone. The texting capabilities won’t be coming until next month, though.

What you can do now is use the iPad and the Mac to make and receive calls. The devices have to be on the same Wi-Fi network, so this won’t help if you left your phone at work. But it’s useful if the phone is charging in another room. Call quality was about what I’d expect from a speakerphone.

— You’ll be able to do more without switching from app to app.

If a text message comes in as you’re browsing the Web, you can pull down the notification and reply right there. You don’t need to leave the Web browser and launch Messages first. You can also delete an email or accept a calendar invite that way.

There are some limitations, though: You get only one reply for text messages. You then have to wait for another message to come in or open the full app. With email, you can mark a message as read or delete it, but you can’t reply. Like Handoff, this will be more useful once more apps take advantage of it and let you do more.

Meanwhile, if you’re chatting with a bunch of friends, you can see their locations (as long as they’ve shared it) without having to leave Messages to open a separate Find My Friends app.

— Members of the same households can share calendars and music more easily.

You pick up to five family members to join your network, for a total of six. These need to be people you trust, as they’ll be using your credit card to make purchases. You can require approval for purchases, such as for kids’ accounts.

Family members will be able to share each other’s books, music, video and apps, so Mom, Dad and Junior won’t need to buy separate copies of the “Frozen” movie. A family calendar and a shared photo album also get set up. The individual still gets to decide which photos and videos show up there for other family members to see.

The walls between Apple apps and third-party apps are breaking down. For example, outside developers will be able to use Apple’s fingerprint authentication system with iOS 8. Before, it was limited to a few Apple services.

Beyond these “unity” features, owners of the new iPhones will be able to pay for goods simply by holding their device near a credit card terminal at retail stores. All iOS 8 users get quicker ways to type messages and reach favorite and recent contacts.

Although you don’t need to rush out to upgrade your devices right away, it’ll eventually be worthwhile to do so, especially if you have a recent device or multiple Apple devices. While last year’s iOS 7 offered cosmetic changes and new gesture controls, this year’s update comes with plenty of new functionality.