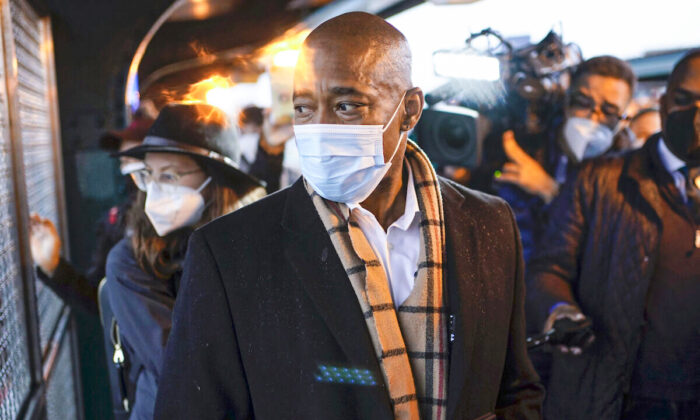 Five Orthodox Jews, including a rabbi, and one Roman Catholic have filed a federal civil rights lawsuit against New York Mayor Eric Adams, claiming the city’s COVID-19 vaccine passport regime is an “unprecedented abuse of power.”

The suit claims the internal passport policy created in a series of executive orders runs afoul of the First, Fifth, and Fourteenth Amendments. The legal complaint labels the sweeping restrictions applied to unvaccinated individuals as part of a “reckless, ill-conceived government policy that ignores sound medical science and the principle of informed consent to medical treatment.”

The 18 plaintiffs, three of whom are suing on behalf of their minor children, refuse on religious grounds to be injected or to have their minor children injected, with any of the available COVID-19 vaccines because of “their connection to cell lines taken from children who were killed by abortion and several other religious reasons,” according to the law firm representing them.

“Ironically enough, one of the plaintiffs escaped from the Soviet Union, to come to the free United States, and what he thought was the free state of New York and the free city of New York, only to be told when he was kicked out of the Javits Convention Center, ‘You can’t come in here unless you show your papers,’” Christopher Ferrara, special counsel for the Thomas More Society, a national public interest law firm that’s representing the plaintiffs, told The Epoch Times.

“Now he’s back to where he has to show his papers, meaning vaccination card,” he said.

The legal complaint (pdf) in the case, Doe v. Adams, court file 1:22-cv-676, was filed in federal court in Brooklyn on Feb. 7. The defendants are Adams; Dave Chokshi, the city’s interim Department of Health and Mental Hygiene Commissioner; and Ashwin Vasan, who is scheduled to succeed Chokshi on March 22. All of the defendants are being sued in their official capacities.

The restrictive system, which the city calls “Key to NYC,” was initiated by former Mayor Bill de Blasio and is now being enforced by Adams, who was sworn in as mayor on Jan. 1. Both men are Democrats.

The passport policy denies unvaccinated individuals access to a wide range of premises, comprising most of social life in the city of 8.4 million, the plaintiffs say.

Referring to Key to NYC, de Blasio declared: “When you hear those words, I want you to imagine the notion that, because someone’s vaccinated, they can do all the amazing things that are available in this city.

“If you want to participate in our society fully, you’ve got to get vaccinated,” de Blasio said when he unveiled the policy in August 2021.

“It is time. For so many people, this is going to be the lifesaving act.”

Ferrara rejected the rationale behind the internal passport system.

“The intention and effect of Key to NYC is to create a two-tiered society in the city of New York, in which those who decline to be vaccinated against COVID-19 will be reduced to the status of second-class citizens, deprived of normal social life until they consent to injection,” he said.

“Never in the history of this country, nor in the history of pandemics generally, has any government declared an entire class of citizens personae non gratae based on refusal to be vaccinated, much less with vaccines now known to be ineffective at preventing transmission of a communicable disease and to be unnecessary for children, who have an infinitesimal risk of death from COVID-19.”

The Big Apple’s “irrational regulation” doesn’t even accomplish its stated purpose, which is to limit the spread of COVID-19, Ferrara said.

According to the report, titled “A Literature Review and Meta-Analysis of the Effects of Lockdowns on COVID-19 Mortality,” lockdowns in Europe and the U.S. reduced COVID-19 deaths by a mere 0.2 percent while having “devastating effects” on economies and exacerbating various social problems.

Lockdowns, school closures, border closures, and limiting gatherings have had no noticeable effect on COVID-19 mortality rates. Lockdowns, in particular, “are ill-founded and should be rejected as a pandemic policy instrument.”

Ferrara said the handling of the pandemic by certain politicians has been “a complete debacle.”

“We’ve never seen anything like it in the history of this country; the damage they caused is beyond human calculation,” the attorney said.

“Numerous courts have upheld the city’s various vaccine mandates, including the Key to NYC,” a spokesman told The Epoch Times by email. “Vaccinations are key to getting us out of this pandemic and furthering the city’s recovery.