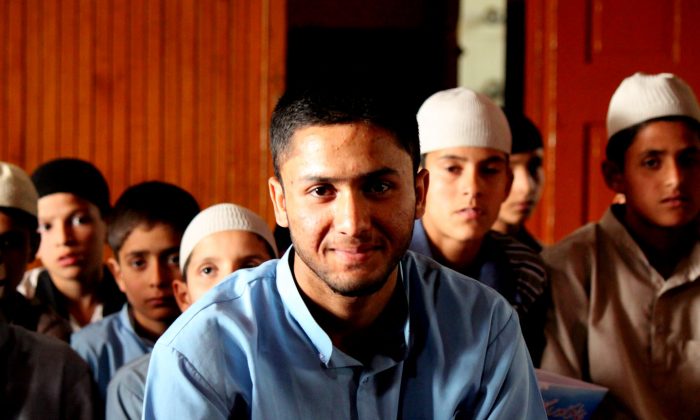 Aamir Ahmed Ganaie, 15, sits in an orphanage run by an organization called the Yateem Foundation on Aug. 23, 2014 in Srinagar, India. Ganaie lost his father in the crossfire between Indian and Pakistani troops on the Line of Control between the two countries in 2004. (Venus Upadhayaya/Epoch Times)
India

Orphans in Kashmir Dream of a Better Life Amid Conflict

SRINAGAR, India—Aamir Ahmed Ganaie, 15, lost his father in 2004, killed in the crossfire between Indian and Pakistani troops. They lived in a village on the Line of Control in a disputed region of Kashmir called Kupwara district.

“[My father] was going to my sister’s house and a tank shell hit him while he was walking on the road,” Ganaie said.

Ganaie now lives in a boys’ home called Bait-ul-Hilal for orphans and semi-orphans like Ganaie. State law defines orphans as children without a father, even if the mother is still alive.

The name “Bait-ul-Hilal” means “the home of moon-like children.” The 50 children here come from various backgrounds, but all are from conflict areas. It’s run by an organization in Srinagar called the Yateem Foundation.

Violent conflict in the region affects children the most. If Ganaie were not at Bait-ul-Hilal, his life would have always been under threat living on the contentious border.

Recently one of Ganaie’s sisters got married. He traveled 57 miles home to be a part of the festivity.

“When I visit home my mother tells me to study well, study with full heart and become something (in life),” Ganaie said. Ganaie wants to become an IAS (Indian Administration Services) officer. “When I grow up I’ll take up the arts (non-science subjects) and then will work very hard.”

At Bait-ul-Hilal, boys are given shelter and education until about 16 years of age, when they finish their tenth year of education. After that, they move out, but the organization continues to support them financially if they go on to higher education.

Bashir Ahmed Bhat is the manager of Bait-ul-Hilal. He says there’s a constant flow of orphans because of the conflict situation in the region. He can only help a portion of the more than 200,000 orphan girls and boys in Jammu and Kashmir.

India and Pakistan have fought three wars over the Kashmir region since 1947, and there have been innumerable armed skirmishes.

In the past two decades many innocent people have been killed in attacks and counter-attacks between the Indian army and the Muslim rebels they call terrorists.

Umer Azad Wani, 16, has been living in Bait-ul-Hilal for ten years after losing his father in the conflict. Wani’s sister recently had to leave school because of financial constraints. His mother works in a school as a cook.

Umer sits in an orphanage run by an organization called the Yateem Foundation on Aug. 23, 2014 in Srinagar, India. (Venus Upadhayaya/Epoch Times)

Now a 10th grade student, Wani wants to study politics so he can contribute to the welfare of the people.

“Nothing happens for the people here. The government is corrupt here. The young generation wants to end the corrupt government,” Wani said. “I believe one can do very good work by becoming a politician.”

“In conflict, it’s the common people who suffer and it’s our moral obligation to help them,” said Bhat.