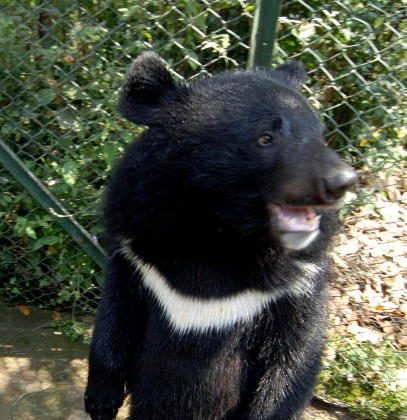 A black bear stands in its enclosure at the Dachigam wildlife sanctuary on the outskirts of Srinagar 19 September 2007. (Rouf Bhat/AFP/Getty Images)
News

Orphaned Bear Cubs Released Into the Wild In Assam

Three popular festivals in India’s North eastern state Assam – Christmas, New Year’s Day, and Magh Bihu celebrated in January saw three Asiatic black bear cubs (Ursus thibetanus) end up in the IFAW (International Fund for Animal Welfare)  rehabilitation center in Kokrajhar. Raised by humans without their mother’s care, the rescued bear cubs have now been returned to the wild in the neighboring Manas National Park where they will continue to live a free life in the wilderness.

Asiatic black bears are a prime target of poachers who indiscriminately hunt them for their skin, gall bladder, and paws. While there is no evidence to suggest that the rescued cubs were orphaned, it is highly likely since young cubs of their age are usually seen with their mothers.

The first of the three bear cubs was found alone on Christmas Eve last year in one of the fringe villages of Manas National Park. After being repeatedly spotted by the locals, the cub was captured and put under rehabilitation to protect it as well as the local people. The second cub was found on New Year’s Day, while the third one was discovered just before ‘Magh Bihu’ on January 13, 2014.

All three cubs were around a year old, and were being taken care by the IFAW-WTI under the watchful eyes of Wildlife Trust of India (WTI) veterinarian, Dr. Panjit Basumatary, and animal keeper Subiram Basumatary.

Subiram the cub’s caregiver in the absence of their bear mom was entrusted with feeding the cubs as well as facilitating their physical activity as part of the systematic process of rehabilitating them into the wild. The cubs were fed a natural diet of fruits and vegetables along with boiled grains and sufficient water. Subiram also ensured that the enclosures were cleaned on alternate days and that the cubs were kept warm at night.

Dr. Bhaskar Choudhury, regional head of IFAW informed that despite human intervention in raising the helpless cubs, the bears have not changed their wild nature – a fact that is always kept in mind when raising such orphaned animals. The cubs still seem to be very aggressive, yet shy of humans, which is a good sign for their rehabilitation.

“These cubs were too old when admitted. They weren’t fit to undergo our regular soft-release programme that involves hand-rearing, followed by walks in the wild accompanied by animal keepers to prepare them for their gradual release. Hence, they are being kept in an enclosure in Manas for a fortnight or so, and then they will be radio-collared and released,” Dr. Choudhury explained.

The release site in the in Doimari range of Manas National Park was selected on the basis of abundant availability of food and distance from human habitation.

The cubs are currently in an in situ enclosure fabricated at this release site getting acclimatized. They will then be radio-collared and released following which their foraging pattern will be checked regularly by the team to ensure that they are surviving well in the forests.

The Asiatic black bear is classified as ‘vulnerable’ in the IUCN Red List of threatened species, and is protected under Schedule I of the Indian Wildlife (Protection) Act, 1972.

This article was originally written and published by Rohit Daniel, a contributing writer for www.indiasendangered.com. Please click HERE for the original story and more information.