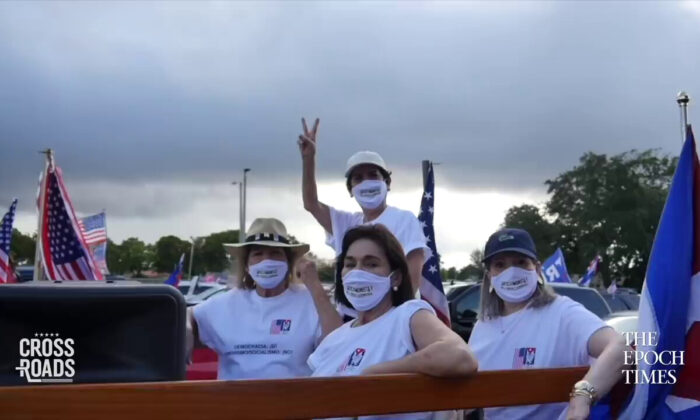 Cuban communities in the U.S., most of whom have in their families people who experienced communism firsthand warn Americans against the lure of socialist or communist utopia promising people heaven on earth, Dr. Orlando Gutierrez-Boronat co-founder and spokesperson for the Cuban Democratic Directorate said.

Cuban-American and Latino-American communities organized in October a caravan of 30,000 cars in Miami, Florida to express their rejection of socialism and communism, and warn against communism’s new phase and its new mutation, Orlando Gutiérrez-Boronat told Epoch Times’ Crossroads program.

The caravan participants’ intention was also to point out that “in the Western hemisphere the sanctuary of communism is in the island of Cuba,” Gutiérrez-Boronat said.

Most Cuban-American families experienced communism firsthand, they have seen how the communist regime persecuted religion, spirituality, destroyed Cuban family, private property, and individual freedom, Gutiérrez-Boronat explained. Many of these families have somebody “who has spent years in political prisons or has been murdered by the Castro regime,” he added.

The Cuban-American community in Florida is “very modern, very successful but also very traditional,” Gutiérrez-Boronat said. It is family-oriented and upholds the authority of the family, he added.

“That wisdom, that knowledge has been passed from one generation to another,” Gutiérrez-Boronat said.

Although the Cuban community is very diverse it is unified in “condemning and rejecting the communist totalitarian state” because of their experience with it, Gutiérrez-Boronat said.

Cuba was “a Western prosperous nation, one of the leading economies in Latin America” until 1959, Gutiérrez-Boronat said. The country had some political problems, “but those were being solved progressively by Cubans,” according to Gutiérrez-Boronat.

According to UN statistics, in 1958 Cuba ranked fifth in the region in per capita GDP, outpaced only by Venezuela, Argentina, Uruguay, and Chile.

In 1959, Fidel Castro seized power promising Cubans free elections and restoring the Cuban constitution of 1940, which was considered one of the most democratic in the region.

None of his promises were delivered and instead Castro’s regime “turned Cuban farmers into the slaves of the state,” took over all industries, media, the universities, and imposed complete control over “any means citizens had to be able to unify and express their desire for change,” Gutiérrez-Boronat said.

After the fall of the Soviet Union in 1992, propaganda was disseminated saying that communism had evolved and was not as deadly or oppressive as it was before and “Cuba was a poor little nation beset by the United States,” Gutiérrez-Boronat said, “All that is false.”

Cuba is “an aggressive communist state” that “has nothing to do with Cuban national identity,” Gutiérrez-Boronat said adding that the Cuban regime has managed to conquer Venezuela, Bolivia, controls Nicaragua, and threatens democracy in Chile.”

Veterans of the FBI told Gutiérrez-Boronat “how they saw firsthand the links between the communist regime in Cuba and the subversive violent groups in the United States.”

“Communism is first and foremost a doctrine of power, a doctrine of history, and a strange new type of religion, a religion that seeks to turn the material world into the replacement of heaven,” Gutiérrez-Boronat said.

“The last thing [communism] is, is an economic system. Communism has experimented continuously with capitalism to survive,” as Lenin, Mao, and the Castros did, Gutiérrez-Boronat said.

“Even if a communist regime or a totalitarian regime can generate some prosperity it always needs scarcity because the ultimate argument of the totalitarians is that the world is a limited place with very limited resources where scarcity is the primary mandate,” Gutiérrez-Boronat explained. Therefore there is a need for a “strong state that administers what is scarce,” every communist regime even in prosperity including Chinese regime works with this idea of scarcity, he added.

Communism “sought to create individuals with no history, no culture, no spirituality who could be transformed into members of a mass and that mass would simply proclaim ‘yes’ to anything the state said,” Gutiérrez-Boronat continued. “That is a diabolical plan to destroy human beings, to reduce the transcendent dimension of human beings, to make them more easily controlled by the state, which becomes the only god that people can worship and look forward to,” he added.

There has been a takeover of culture, media, and education by Marxists which in turn created a rejection of the values, of the sacredness of individual freedom, of private property, the right to life, or the rule of law “which are basic to people being free,” to people being able to have moral responsibility over their own lives, Gutiérrez-Boronat said.

This “strategy has created a mass of people who are enamored of a utopia that will never take place and don’t appreciate the reality of living in a free society,” Gutiérrez-Boronat said.

Living in a free society as a free person is very rigorous. “You have to make a lot of decisions, you have to be responsible for your own actions, you have to be accountable to yourself, whereas socialism promises to liberate you from all that. If you give full allegiance to the state then the state will alleviate the tension of your daily life. That is a utopia, it doesn’t exist, it’s just a way to fool you, and trap you, and imprison you,” Gutiérrez-Boronat said.

“Everything has to be paid in some manner and the way that people in communist regimes pay for education, health care is by surrendering other freedom and other rights,” Gutiérrez-Boronat said.