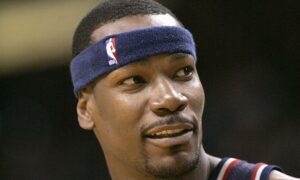 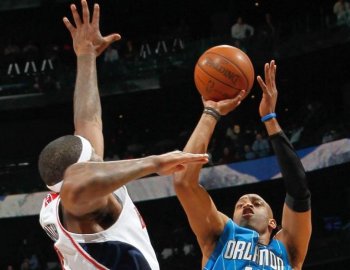 Orlando Brushes Aside Atlanta to Move to East Finals

By Dan Pomerleau
Print
The Orlando Magic swept their Eastern Conference semifinal series against the Atlanta Hawks on Monday night with a 98–84 win at Philips Arena in Atlanta.

Orlando outscored Atlanta by 101 points in the series to make for the biggest playoff series-scoring differential in NBA history.

“We do everything together, and I think that’s what helps us on the court. We talk a lot. We spend a lot of time together,” a humble Dwight Howard told TNT after Monday’s game.

“We’ve just been working hard every day in practice to get better, and we’ve just got to continue to do that if we want to win a championship.”

Veteran Vince Carter had another great performance leading the game in scoring with 22 points—14 coming in the second half.

Orlando’s outside shooting was absolutely devastating. They went 16–37 from beyond the perimeter. The record for 3-pointers in a playoff game is 20.

Orlando’s starters had well-balanced scoring in the first quarter with the exception of Jameer Nelson who led with 10 points.

Atlanta on the other hand was slow to get going and their defense was stagnant. At one point in the first quarter Orlando had back-to-back uncontested fast breaks.

Orlando was up by 18 points in the beginning of the second quarter off the hot hand of Mickael Pietrus who hit three 3-pointers.

But the Hawks wouldn’t go away easily and battled back to within eight points with Josh Smith and Joe Johnson attacking the basket for a halftime score of 53–45.

“These guys are fighting for their lives. We’ve got to pick it up in the second half and get the win.”

The third quarter was evenly contested with Orlando outscoring Atlanta by one point 22–21.

Every surge that the Magic made was offset by the Hawks’ sixth man of the year Jamal Crawford who finished the night with 18 points.

But it was all over for Atlanta in the fourth quarter. The Magic opened with a 9–0 run with Vince Carter turning on the heat. Atlanta had no answer to Orlando’s outside shot.

Orlando’s sweep comes on the heels of the Phoenix Suns’ sweep of the San Antonio Spurs on Sunday.

The Los Angeles Lakers also had an opportunity to close out the Utah Jazz on Monday night. The only conference semifinal series to be close so far is the Cleveland Cavaliers–Boston Celtics series, which is now tied 2–2.

If the Cavs can battle through the scrappy play of Boston, we’ll see a repeat of last year’s Eastern Conference Finals with Cleveland facing off against Orlando.

Orlando will have had plenty of rest going into the matchup and the confidence that a solid sweep brings.

Orlando also has won 14 straight games after Monday night, and hasn’t over-relied on a star player like the Cavaliers. This could very likely give them the edge to thwart LeBron James’s championship hopes yet again like they did in Game 7 last year.