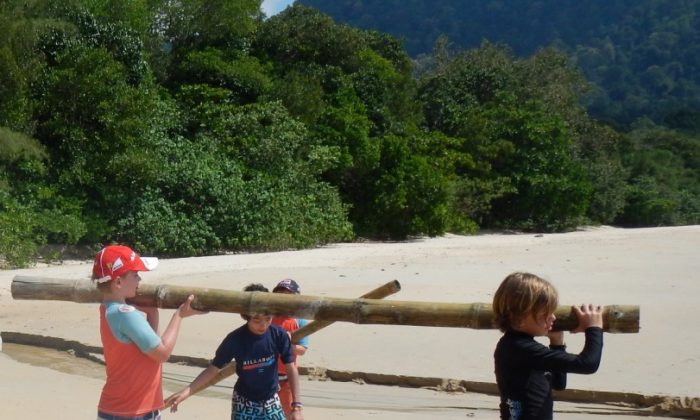 With bamboo from the rainforest and grim determination, eight children set out to show the rest of the world what Ocean Day was all about.
Opinion

Another year had passed and concerned people were celebrating World Ocean Day on June 8th. We all depend on a healthy and clean ocean for our very survival and the latest scientific research is painting a dismal picture of things to come. Most of us know we need to act to turn around the damage caused by unwise use, pollution, and over fishing. But few of us do anything.

This year’s World Ocean Day theme is, “Together we have the power to protect the ocean” and all over the globe small groups of people set out to make a difference.

Perhaps the smallest but most well meaning effort was on the tiny island of Langkawi just a few kilometers from the Thailand- Malaysia border. There the Andaman Resort operates a small coral nursery that both educates children and rehabilitates a tsunami ravaged coral reef.

This year the small band of young volunteers (and a couple of parents who wanted to get involved with their children) were busy maintaining the nursery, feeding the lobsters, and grafting tiny corals when World Ocean Day rolled around.

What could eight dedicated children do to save the sea; how could so few make a difference?

When the 2004 tsunami roared ashore, the huge wave swept tens of thousands of living corals off the fringing reef and up into the ancient rainforest. Over the last 4 years guests at the luxury resort have collected by hand about 100 tonnes of dead coral skeletons and carried them to the coral nursery.

There, with the assistance of resort staff, the dead coral rock is recycled into mini-Artificial Reef Modules that provide much needed shelter for young marine life and a stable substrate for corals to grow on. They are heavy, have ‘baby’ corals attached, and are difficult to move.

“But we want to do it! We want to take the corals out to the reef”, said Liam who was quickly backed up by his determined younger brother, Callum. Liam is one of the hard working volunteers that regularly return to the Andaman to work at the Coral Nursery. World Ocean day marked the fourth visit of his family since the end of 2013 and school holidays. Determined to become a marine biologist because of his Nursery experiences, Liam led the way.

Bamboo from the rainforest served as a framework, odd pieces of rope and ‘strange’ knots worked as fastenings, and inner tubes from tires provided floatation. The kids built their own raft without any help and managed to load the mini- Artificial Reef Modules aboard. Plastic kitchen utensils splashed water over the living corals and swimmers in life jackets towed the raft out to the reef where the Modules were lowered to the ocean floor.

Coral reefs comprise the most diverse ecosystems on Earth but are now threatened with destruction. They occupy just over 0.15% of the world’s oceans, yet incredibly they provide a home for an estimated 25% of all marine species. They really are the “engine room” of the sea and their loss will cripple the marine environment on a global scale.

Productivity is higher than in other tropical waters and 6 million tons of fish are taken each year from the world’s coral reefs. Most of this stays in protein-poor countries. Langkawi’s community is largely dependent on local fisheries for protein and the next generation needs the Andaman Reef.

Biodiversity is the loudest catch cry in environmental research today. It is a measure of the complexity of an ecosystem and is now thought to be related to the health of the entire planet. Southeast Asian coral reefs have the highest levels of biodiversity of all the world’s marine ecosystems, perhaps the highest biodiversity since the beginning of life on Earth.

The children worked most of the afternoon putting six Modules with 30 coral colonies in place. By doing something small but highly visible for Langkawi’s World Ocean Day, the children helped to focus attention on the plight of reefs around the world.

Sunburned, thirsty, scraped knuckles, and smiling, the children returned to shore and the cool of the rainforest to share their adventure with their parents.

Will their experience change the way they live? It has already.An email this morning from one of the parents said that her children were talking about recycling and hybrid cars.

The kids proved that even one person can make a difference and “Together we have the power to protect the ocean!”