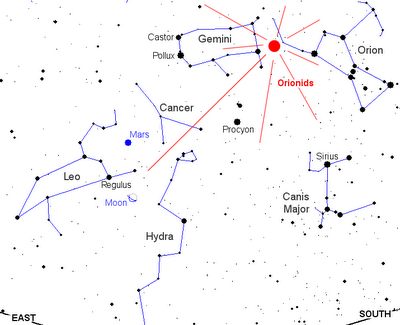 The Orionids Meteor Shower peaks tonight, Oct. 20, and is also expected to have a strong showing on Oct. 21.

The best time to view the meteors that are part of the Orionids shower is between midnight and dawn, according to NASA.

The peak meteor count is about 20 meteors per hour, in moonless skies.

“The Orionids, which peak during mid-October each year, are considered to be one of the most beautiful showers of the year,” NASA says. “Orionid meteors are known for their brightness and for their speed. These meteors are fast — they travel at about 148,000 mph (66 km/s) into the Earth’s atmosphere. Fast meteors can leave glowing ‘trains’ (incandescent bits of debris in the wake of the meteor) that last for several seconds to minutes. Fast meteors can also sometimes become fireballs: Look for prolonged explosions of light when viewing the Orionid meteor shower.”

People in both the southern and northern hemispheres can catch this shower. Simply find an area away from city and street lights, and bring a sleeping bag, blanket, or lawn chair.

The meteor shower is supposed to last until dawn.