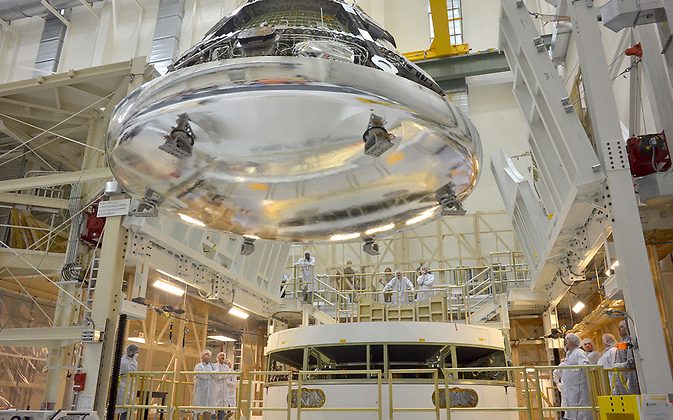 Orion Project: NASA Spacecraft That Could Provide Path to Mars Readying for Launch

NASA’s Orion project is getting closer to the testing phase, as engineers work on moving the spacecraft into the correct configuration for launch.

The spacecraft is slated to launch 3,600 miles into space in December.

The module will be unmanned but the four-hour flight will help engineers to ready the craft and similar models for future trips further into space, including to Mars.

“Now that we’re getting so close to launch, the spacecraft completion work is visible every day,” said Mark Geyer, NASA’s Orion Program manager, in a statement.

“Orion’s flight test will provide us with important data that will help us test out systems and further refine the design so we can safely send humans far into the solar system to uncover new scientific discoveries on future missions.”

After two orbits around Earth, Orion will reenter the atmosphere at almost 20,000 miles per hour before its parachute system deploys to slow the spacecraft for a splashdown in the Pacific Ocean.

The research should help the United States in its planned mission to Mars in the next decade.

A recent National Research Council said that its important that the country set the ultimate space goal as sending humans to Mars. The moon is also a priority but President Barack Obama has said before that he doesn’t view it as one.

The capsule Orion is named as one of the main crafts for future space travel.