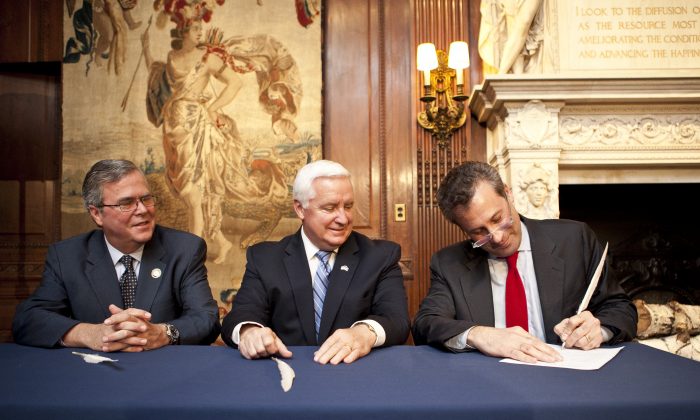 NYPL trustee Ed Wachenheim III (L), Pennsylvania Governor Tom Corbett (C), NYPL president Tony Marx (R), at the 5th avenue New York Public Library on May 22. Corbett and Marx signed an historic agreement that will share an original copy of the Bill of Rights between the Library and the Commonwealth of Pennsylvania. The copy will be available for public view in 2014. (Samira Bouaou/ Epoch Times Staff)
New York

Original Bill of Rights Made Public to Give Hope to World

NEW YORK— Ed Wachenheim III initially hesitated when the president of New York Public Library had asked him to fund the development of a very “expensive and complicated box.” The photooxidation-preventing case would cost $600,000 to protect a 31 inch document from air and light.

But the creation of this case will mean that for the first time in over three decades, an original copy of the Bill of Rights will be made public for New Yorkers and tourists to view. For Wachenheim, it meant the potential to inspire freedom around the world.

“I started thinking…if in the course of the next several years a handful of the millions of people who will see the Bill of Rights can have the idea to advance democracy, to advance human rights in some way, then this very expensive box will turn out to be one of the best investments the New York Public Library has ever made,” said Wachenheim, a trustee of the New York Public Library (NYPL).

The document preserved in NYPL is the only remaining legible one of the 14 original copies of the Bill of Rights. The originals were written in 1789 in Iron Gall ink, which is sensitive to light.

“A part of the reason why we haven’t displayed it continuously is because the other copies are so faded that you can hardly see any of the words,” said Victoria Steele, NYPL Director of Collections. “It was not meant to be out all the time, but this special encasement will allow it to be.”

The case will be constructed by researchers from the National Institute for Standards and Technology, based on technology developed for the Charters of Freedom at the National Archives.

It will create a micro-environment that is designed to reduce light levels and UV light to the minimum, as well as provide a stable humidity for the national treasure. The case will use argon gas to prevent air deterioration.

The First Congress gave the original copies to the 13 colonies, but New York and Pennsylvania are two of the four states that have lost their original copies.

In 1896, NYPL trustee John S. Kennedy donated one of the originals to NYPL after purchasing it from
American artifact collector Dr. Thomas Addis Emmet.

Some have speculated whether this copy had originally belonged to Pennsylvania.

Pennsylvania Gov. Tom Corbett signed an agreement with Tony Marx, president of NYPL on Wednesday to share the document.

“Even though I was a lawyer I’d like to believe that we can resolve things without going to court. And that’s what today is, it is a win-win. We were able to sit down and talk about how we are going to share this with people of New York and people of Pennsylvania,” Corbett said.

The original Bill of Rights actually contain 12 proposed amendments; one was thrown out while another remained pending until 1992. The initially unapproved proposals include one that advocated for a larger House of Representatives, which by the proposed proportion would equal to 6,000 members today.

“We are all respectful of how well Congress is currently working; we can only imagine how it would go with 6,000 members in Congress,” Marx said, which was followed by a wave of laughter.

The second declined amendment was one that would allow Congress to vote for a raise.

“It’s incredible, they got rid of the two that they should have gotten rid of,” Marx said.

In 1992 it original “second amendment” passed as the 27th amendment because it did not mention a time frame in which the majority state ratifications were needed by.

The document will be on display in Pennsylvania starting in fall 2014. It will remain at the National Constitution Center from 2014 to 2017. Afterward, it will be returned to NYPL for public display when they are finished with renovations.

The document will continue to alternate between the two locations.

“At a moment when human rights is challenged around the world, when they are debated in our country on an hourly basis, we are dedicated to making available to all, from anywhere in the world to come to New York or Pennsylvania and to be inspired by that which has guided and inspired Americans for over two centuries,” Marx said.