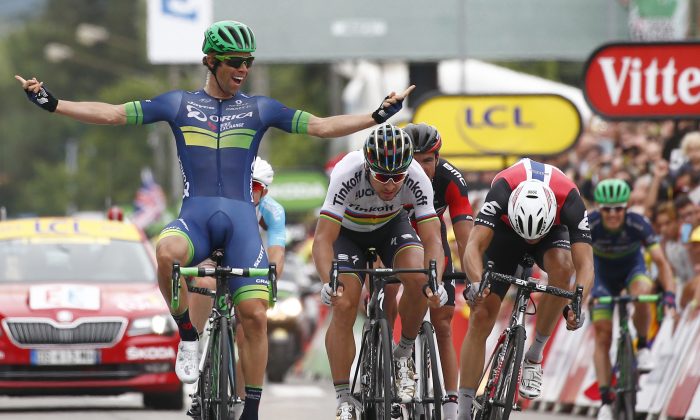 After laboring up the ascent of the Cat 1 Port d’Envslira which started the stage, Matthews attached himself to what proved to be the winning breakaway of 15 riders. This breakaway fractured when hit by strong crosswinds 25 km from the end of the stage.

Matthews’ team mates, Daryl Impey and Luke Durbride, launched repeated attacks in the closing kilometers, forcing Sagan, who had not tem mates in the break to cover each acceleration by himself. By the time Greg Van Avermaet set out for the final sprint, Sagan’s legs were already sapped.

Van Avermaet started his sprint from the back of the bunch and a long way from the line; Edwald Boasson-Hagen jumped at the same time, and the pair passed Sagan on the right. Matthews held off, then charged last, coming around the other two on the right and leaving Sagan trapped on the left.

The Tinkoff rider had to ease off, swing right, and chase, he managed to catch Matthews, but could not pull past.

Matthews had won five Grands Tours stages, but had had terrible luck with accidents in the Tour in the past two years. Finally winning a Tour stage was a huge relief for the Orica rider; it was also a huge boost for the team, which had yet to win a stage in this year’s tour.

“I was close to giving in at this race after I had two bad crashes two and one years ago. This time around, I’ve crashed three times already. I thought maybe this race is not for me,” Matthews told LeTour.com.

“It was never the plan to go for a breakaway today. We wanted a bunch sprint finish but we’re such a strong group of guys. Durbridge and Impey gave me everything to win today. I have no word to describe what they did for me. They did a special job.

“At the top of the climb [Port d’Envalira], with Sagan and Nibali, I wasn’t sure of what was going to happen but I heard on the radio that Luke Durbridge and Daryl Impey were coming across and it made me believe that I could win the stage. Luke rode in the crosswinds, he split the break in two pieces.

“We still kept guys in the finale that would be hard to beat so Impey attacked and let me out. I couldn’t ask for more from them. They would have been disappointed if I hadn’t won but today I did.”