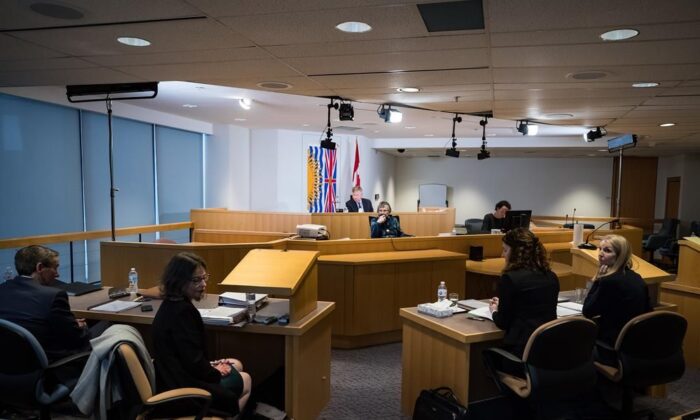 Commissioner Austin Cullen, back left, listens to introductions before opening statements at the Cullen Commission of Inquiry into Money Laundering in British Columbia, in Vancouver, on Feb. 24, 2020. (The Canadian Press/Darryl Dyck)
Canada

Thirty-one organized criminal groups (OCGs) have members employed in Canadian public sector agencies or departments, and six are known to have significant influence, according to a recent report by an inter-agency organization that serves to coordinate criminal intelligence among member police forces.

The 2021 Public Report on Organized Crime, issued by Criminal Intelligence Service Canada (CISC), identified over 2,600 OCGs known or believed to be operating in Canada, and said 14 are national high-level threats, with 7 in Ontario, 3 each in Quebec and B.C., and 1 in Alberta.

In addition to their involvement in outlaw motorcycle gangs, street gangs and firearms violence, and networks related to the Mafia, fentanyl, methamphetamine, money laundering, and cybercrime, two of these threat groups have made public sector infiltration part of their operations.

The report warns that Canada is among the top countries impacted by ransomware, with businesses, hospitals, police departments, and multiple levels of government falling victim.

“Law enforcement agencies are increasingly becoming a target; release of police operations, including criminal investigations, could have significant implications for public safety,” it says.

“While infiltration of the public sector seems to occur mostly at the local/regional levels, OCGs may be using the benefits for interprovincial or international criminal activities,” the report states.

Of the over 2,600 OCGs identified, 11 percent are reported to be involved in, or have attempted, some degree of public sector infiltration, but CISC suspects that the problem is even worse than what it knows.

“This represents a significant intelligence gap and the actual proportion is likely higher, as the involvement of almost two-thirds of the assessed OCGs in this sector is unknown. Of those who are, some have ties with municipalities through associates or personal relations within major Canadian cities,” says the report.

Vanessa Iafolla, principal at Anti-Fraud Intelligence Consulting, says the Canada Financial Crimes Agency announced in the April 7 federal budget, along with the publicly accessible beneficial ownership registry the budget proposed to implement by 2023, will help the Financial Transactions and Reports Analysis Centre of Canada (FINTRAC) offer the inter-agency cooperation required for law enforcement.

“A great place to start [is] better links between provinces and the feds for FINTRAC data. I find it curious that a specific agency devoted to dealing with money laundering and terrorist financing is not able to communicate with other agencies that may also share those same concerns. And that is a big problem to me,” Iafolla, who is also an assistant professor of criminology at Saint Mary’s University, told The Epoch Times.

“Canada has ranked well in corruption surveys and that’s always surprised me, given the extent of corruption I’ve observed, especially in the industries we find like construction, like transport,” McGuire said.

“This is the first one of these reports that I’ve seen that focused so much on public and private infiltration. I really loved how those messages were sent out in flashing lights.”

According to the CISC report, the primary industries for public sector infiltration include “transportation, construction, health care, pharmaceuticals, waste management, law enforcement, defence, and global affairs.” It notes that charges of corruption, fraud, and breach of trust have been laid against Ontario tow truck companies in connection with public sector infiltration.

The report also says that “corruptive activities in government processes can increase project costs by up to 50%,” and this problem “increase costs of public goods and services, leads to misallocation of public resources, weakens policy-making and implementation, and damages public confidence in the government and law enforcement.”

Iafolla said she has seen inside information on a national business dealing with waste management, recycling, and garbage that illustrates how corruption can affect operations.

“They were able to secure contracts through what are suspected, but unproven, corrupt ties via procurement. And so they keep getting these contracts. Even though they’re operating as a legitimate business, the business practices remain, in many respects, illegitimate,” she said.

“Illegal dumping, improper waste management, all of this stuff that is supposed to go into proper disposal of recycling and refuse—it doesn’t happen. And so that continues to be profitable for this company.”

The report numbers 81 OCGs associated with transportation and warehousing businesses, 71 with construction businesses, and 25 linked to technical, scientific, and professional services. It warns that criminal activities associated with these industries put those businesses “at risk of being exploited to obtain government contracts” or to acquire privileged and sensitive information.

It adds that “familial / romantic relationships and monetary benefits appear to be the principal factors motivating corruption and infiltration in the public sector in Canada.”

McGuire says a criminal insider within a public agency can identify whom to pressure with bribery or blackmail, or whose relatives to put in jeopardy. Insiders may also reveal information about rival bids on contracts, giving an inside edge to companies vying for government tenders.

“It’s the most cost-effective way of getting the influence that you need to get. You’re talking one salary at $80,000 a year and you can manipulate bids, and you can understand the weaknesses of those that are putting out the tenders,” he said.

Penalties Should Fit the Crime

While the report says two OCGs who have infiltrated the public sector pose a high-level threat, McGuire says FINTRAC’s own documents suggest that its investigations and resulting penalties don’t account for the scale of the offences.

“When they’re issuing the penalties, like they did with Taiwanese Credit Union, like recently with the industrial Commercial Bank of China, the actual harm that they say that is caused isn’t related to the offence, or the extent of money laundering. It’s far more to do with the compliance,” he said.

“The incentives aren’t aligned. You can suffer a half-million-dollar penalty for the drug dealer, the same as a transnational, organized criminal. [FINTRAC personnel] might put numbers up on the scoreboard on a whole bunch of easy cases to make it look like you’re being a good citizen.”