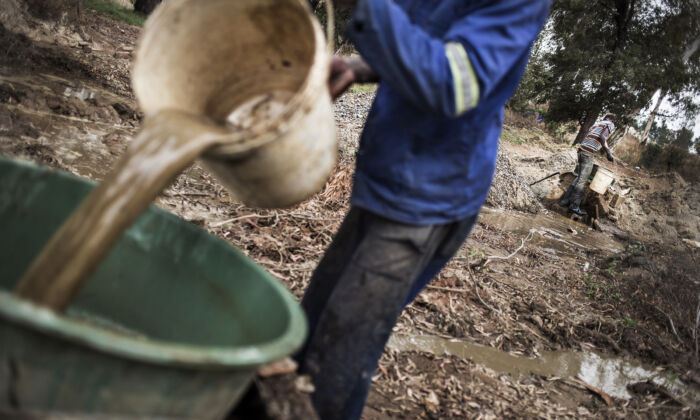 Illegal miners sift through mounds of disused stone to find gold dust, which is then sold to buyers who process it further to extract the gold particles and bind them together. File photo from 2015. (John Wessels/AFP via Getty Images)
Africa

JOHANNESBURG, South Africa—In the shadow of a six-story-high mine dump, excavated sand gleaming white in the sun, a young man, sweat streaming down his bare chest, runs his fingers through a bucket of stony dirt he’s just pulled from the depths of a dark shaft.

David Mokushane (not his real name) is a zama zama, an illegal miner, on the western outskirts of Johannesburg.

In the language of Sesotho, he chuckles: “All the time, every day, we wait for the big one, the big find, something left behind many years ago, to make us money to feed our families for a year.”

When gold was discovered on the Witwatersrand (Edge of White Water) by a Welsh mineralogist in 1852, it ignited a rush on the richest gold deposits in the world that laid the foundation for the most industrialized economy in Africa, gave Johannesburg its Zulu name of eGoli (City of Gold), and sparked the Anglo-Boer War.

There’s been conflict around minerals ever since, with the fighting now centered on the presence of zama zamas. They’re usually undocumented migrants from other African countries with extensive mining histories, including Lesotho, Mozambique, Democratic Republic of Congo (DRC), and Zambia.

About a decade ago, partly to protect themselves from anti-foreigner attacks and partly to protect their loot, the illegal miners began forming gangs, and affiliating themselves with organized crime groups, according to Julian Rademeyer, director of the Global Initiative Against Transnational Organized Crime’s (GITOC) East and Southern Africa Observatory.

Rademeyer told The Epoch Times the zama zama gangs armed themselves with weapons, such as Russian-made AK-47 assault rifles.

But, on the night of 28 July, something happened that shocked even a country accustomed to brutal crime.

As a crew of about 20 filmed a music video at an old mine near the town of Krugersdorp, west of Johannesburg, scores of zama zamas surrounded them and sexually assaulted eight women in the group.

As news of the atrocity hit the streets, furious mobs formed in some townships, hunting zama zamas and “undocumented foreigners.”

In Kagiso, near Krugersdorp, residents armed themselves with anything they could lay their hands on, including rocks, pickaxes, hammers, knives, and shovels. They rampaged through the area, torching shacks belonging to foreigners.

At least one wasn’t as fortunate.

The Epoch Times saw his charred remains, a police officer explaining: “The crowd hit him with bricks, even the old ladies. They said he was a makwerekwere [local disparaging slang meaning foreigner], tsotsi (criminal). Then they threw a tyre on him, poured the petrol and set it alight.”

David Lewis, director of the Corruption Watch group, told The Epoch Times years of neglect and corruption by the ruling African National Congress (ANC), and especially its failure to create jobs, have resulted in South Africa’s unemployed poor masses venting their anger on foreign migrants.

South Africa has the highest unemployment rate in the world, at around 35 percent.

As the vigilantes raged, so Mawela’s forces launched what they called a “full-scale crackdown” on illegal mining. They arrested 81 suspects in connection with the Krugersdorp atrocity, DNA linking only seven to the rapes.

During one operation in the Westonaria district, Mawela pointed to an area almost completely enclosed by massive mine dumps and told reporters: “Hidden in there we found a fresh gold processing center. On each corner of this area there were two shooters, protecting the facility from intruders.”

There, police arrested more than 50 alleged zama zamas, some aged between 12 and 16.

Dave Davis, an investigator from the Hawks special police unit, told The Epoch Times the gangs force boys trafficked to South Africa from neighboring countries to work in narrow tunnels in which they’re sometimes buried alive.

“The gangs steal gold-bearing material from different mines, they wash it and then they eventually make an amalgam with mercury. They melt that into gold nuggets, which make their way into the illicit market,” said Davis.

Rademeyer said illegal mining is increasing on an “unprecedented scale” across the continent, especially in already-lawless mineral-rich nations such as DRC.

Earlier this year, a report from the French Institute of International Relations (IFRI) in Paris said illegal Chinese mining and timber companies are “running rampant in the DRC’s eastern province of South Kivu, fueling corruption that empowers ruling elites and impoverishes local communities.”

IFRI researchers Justin Mwetaminwa and Thierry Vircoulon found that DRC authorities, including the military, are cooperating with six Chinese firms to mine gold illegally.

They write: “These uncontrolled mining operations are accompanied by the militarization of mining sites, often resulting in violence against civilians.

“In recent years, the DRC has committed to implementing administrative, social, and environmental certification processes for mining activities.

“However, the control of the mining sector by a predatory partnership between foreign interests and certain local and national elites makes any attempts to improve mining governance illusory.

“Despite the mobilization of local communities and the prohibition of Chinese mining companies’ activities in this area, they continue to mine.”

The Chinese companies—as well as the DRC government—did not respond to requests for comment from The Epoch Times.

According to Rademeyer, the reactive policing practiced by most African law enforcement agencies, where they’re not themselves involved in the crime, is “never going to come close to stemming” illicit mining.

“The police deploy special task forces and tactical response teams. All very good, but also too late. What you need are targeted, intelligence-driven investigations and a very clear strategy to tackle organized crime.”

GTOC says it’s no coincidence that some of the most violent places on earth are areas where illegal mining’s happening, including South Kivu.

In 2019, says the European Union-funded organization, the murder rate for the Free State Goldfields region of South Africa reached 55 cases per 100,000 people, a rate that placed it among the 15 most violent places on the planet.

Rademeyer said illegal mining is part of an illicit supply chain with many tentacles.

“Over the last decade, sophisticated syndicates have become involved because unlike, say, drug smuggling, the authorities just don’t have their eye on illegal mining. There are extortion rackets connected to it. There are networks of people connected through gold refineries, second-hand jewelers, scrap metal dealers …”

He’s convinced that the majority of African governments and law enforcement agencies aren’t taking the problem of organized crime seriously enough … Some, because they’re benefiting from it.

“In some cases, the authorities are helping the gangs to harvest and smuggle gold, diamonds and other precious minerals. It’s not the zama zamas getting rich, they’re just the pawns. Powerful people are getting richer and richer because of this,” said Rademeyer.

GITOC investigators have traced much of the stolen African gold to the United Arab Emirates, where it’s further refined and then sold on to contacts across the globe, including in the United States and Europe.

“Some of it also goes to China and India,” said Rademeyer. “This is an extraordinarily lucrative business that operates transnationally.

“You can arrest hundreds of zama zamas; you can deport them, but that’s not going to deal with the broader transnational criminal links, and that’s where you need credible, purposeful investigations.”