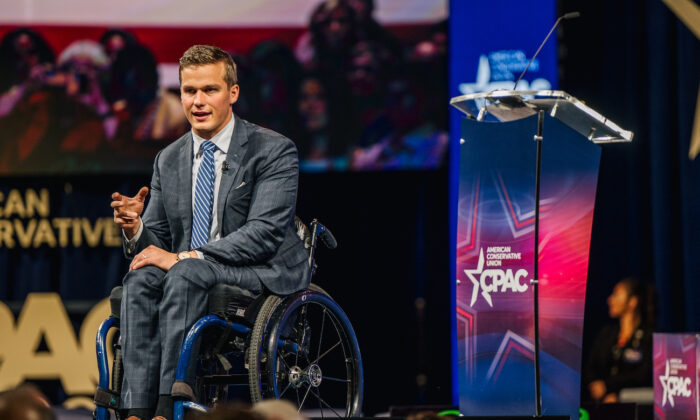 A non-profit organization is using a post-Civil War constitutional amendment to delegitimize Rep. Madison Cawthorn’s (R-N.C.) candidacy for office in the upcoming primaries based on allegations of his involvement in the Jan. 6 U.S. Capitol breach.

Free Speech For People (FSFP) represents several North Carolina voters invoking section three of the Fourteenth Amendment to the U.S. Constitution called the disqualification clause that states no person who has engaged in an “insurrection or rebellion” against the U.S. government can be a representative in Congress.

The challenge, filed with the North Carolina State Board of Elections, alleges that there is “reasonable suspicion” that Cawthorn was involved in the breach.

There have been multiple conflicting narratives about what took place on Jan. 6, including what the FBI’s role was in it.

Dr. Andy Jackson with the John Locke Foundation—an independent research institute in North Carolina that examines issues around freedom, personal responsibility, and limited constitutional government—told The Epoch Times that the amendment was ratified after the Civil War to prevent those from southern states who had served in or supported the confederacy from holding positions in Congress.

In its press release, Ron Fein, legal director of Free Speech For People, said Cawthorn coordinated and aided what Fein described as an insurrection.

North Carolina’s candidacy-challenge statute gives a registered voter the authority to challenge a candidate based on “reasonable suspicion or belief” that “the candidate does not meet the constitutional or statutory qualifications for the office, including residency.”

Former Associate Justice and Chief Justice of the North Carolina Supreme Court, Robert Orr and James Exum, respectively, will be serving as special counsel to the FSFP.

Once filed, the burden of proof, according to state law, falls on Cawthorn to counter the complaint.

“The challengers intend to depose Cawthorn and members of his staff—something that the U.S. House January 6 Select Committee has not yet done,” the press release stated.

FSFP cites tweets from Cawthorn as evidence of his involvement, such as one in which he states that “the future of this Republic hinges on the actions of a solitary few . . . It’s time to fight.”

FSFP relies on an article from Rolling Stone based on two anonymous sources who alleged they were involved in pro-Trump rallies and had witnessed “multiple members of Congress” involved in a conspiracy to overturn the election results through violence.

Cawthorn, who currently represents the 11th congressional district, a seat previously held by Meadows, has disputed the results of the 2020 election and voted against certifying President Joe Biden.

Cawthorn’s spokesperson Luke Ball responded to the challenge on Twitter stating, “Over 245,000 patriots from Western North Carolina Elected Congressman Cawthorn to serve them in Washington. A dozen activists who are comically interpreting and twisting the 14th Amendment for political gain will not distract him from that service.”

A spokesperson for the state Board of Elections told The Epoch Times that after redistricting lawsuits are resolved, the board, according to state law, will name a five-member panel of county boards of elections members to hear the challenges. Appeals to the state board’s decision would be filed with the North Carolina Court of Appeals.

In December, the North Carolina Supreme Court ordered a preliminary injunction for the March primaries and suspended candidate filings until two lawsuits alleging gerrymandering of redistricted maps are settled.

After being upheld in the trial court, the plaintiffs appealed the ruling.

Jackson explained that as a part of its preliminary injunction, the court wrote that any appeals would skip the Court of Appeals and go straight to the North Carolina Supreme Court, which has a 4–3 Democratic majority, although Chief Justice Paul Newby is a Republican.

In November, Cawthorn announced his run for the 13th congressional district, a district currently represented by Rep. Ted Budd (R-N.C.).

Throughout 2021, Cawthorn was frequently seen at local school board meetings and freedom rallies in his district, siding with parents who oppose mask mandates and critical race theory being taught in school.

Budd, a Republican backed by former President Donald Trump, announced his candidacy for Sen. Richard Burr’s (R-N.C.) seat after Burr said he would not seek reelection in 2022.

Budd was one of 126 Republican members of the House of Representatives who signed an amicus brief in support of Texas v. Pennsylvania, which was a lawsuit filed in the U.S. Supreme Court contesting the 2020 presidential election.

Also in the running for Burr’s seat is former Chief Justice of the North Carolina Supreme Court Cheri Beasley, a candidate for the Democratic Party nomination.

Also in the running for Burr’s seat is former Chief Justice of the North Carolina Supreme Court Cheri Beasley, a candidate for the Democratic Party nomination.

The U.S. Senate currently has 48 Democrats, 2 independents, and 50 Republicans, with Vice President Kamala Harris as president of the Senate having the authority to break a tie on a partisan vote on which the two Independents—Angus King (I-Maine) and Bernie Sanders (I-Vt.)—will typically caucus with Democrats.