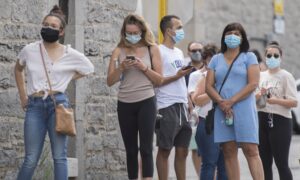 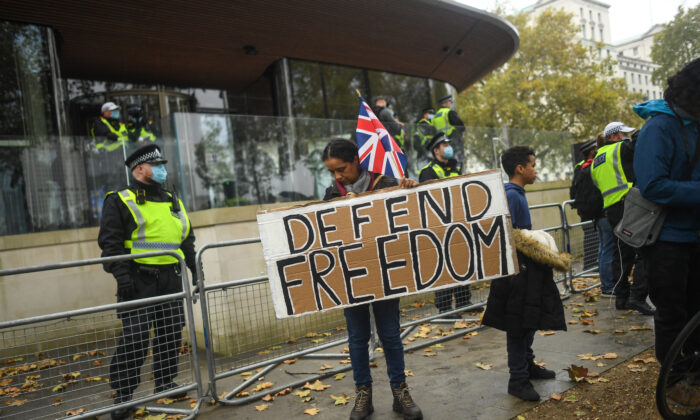 Organiser of London Anti-Lockdown Protest Could be Fined £10,000

The Met stated that officers were called on Dec. 27 to find about 100 people gathering in Ray Lane, Southwark, in what appeared to be a pre-planned protest.

“This sort of gathering is specifically prohibited under the tier four restrictions brought in following the recent rapid rise in cases,” Acting Inspector David Smith said in a statement.

“We all have a responsibility to follow the rules, stay at home as much as possible, and help stop the rapid spread of COVID-19 in our city,” he added.

“Anyone coordinating intentional breaches on this scale should know they risk very significant financial penalties,” he said.

The Met said that the organiser, a 58-year-old man, will be reported for the consideration of a fixed penalty notice of up to £10,000.

London is currently under tier four restrictions to curb the spread of the CCP (Chinese Communist Party) virus, following the discovery of a new variant of the virus that authorities say is more infectious. Residents have been told to stay at home unless they have a “reasonable excuse” to leave their houses.

Under the Health Protection Regulations 2020, gatherings organised by a business; a charitable, benevolent, or philanthropic institution; a public body; or a political body can take place if the organiser carries out a risk assessment that satisfies regulations and takes all reasonable measures to limit the risk of transmission.

On Dec. 19, the Met arrested 29 protesters after they allegedly refused to cooperate with police.

The Met said on Dec. 20 that the female organizer of one of the protests, which was attended by around 150 people, had been reported for consideration of a £10,000 fixed penalty notice.

Three men, Christmas Fallah, 35, Joss Lillis, 27, and Leon Larose, 28, “have been charged under Health Protection Regulations with participating in a gathering of two or more people. All three men were also charged with assaulting an emergency worker,” the Met said in a statement.

After the Chinese regime started to lock down cities in January, many Western countries adopted similar methods to attempt to control the spread of the virus.

Neil Ferguson, an Imperial College professor who was a government adviser for the Scientific Advisory Group for Emergencies (SAGE) until May, said the government didn’t think it was possible to use lockdowns in the UK in the same way as in China.

“It’s a communist one party state, we said. We couldn’t get away with it in Europe, we thought,” Ferguson told The Times of London last week. “And then Italy did it. And we realised we could.”

Ferguson said that the data from China showed lockdown was “an effective policy.”

Ferguson quit SAGE in May after he was caught breaking CCP virus restrictions.

By March 11, when the WHO declared COVID-19 a pandemic, Chinese officials reported 3,169 deaths from the CCP virus, but information provided by residents at the epicenter of the virus in Wuhan, China, indicated that the real death toll there could be 12.7 times the official figure.

But Ferguson’s model has since been found to be greatly flawed, according to the Montreal Economic Institute and others. Research by data scientist and computational epidemiologist Chris von Csefalvay found numerous problems with Ferguson’s modelling, including that it was 13 years old and was written to model an influenza pandemic.

Nicole Hao and Isaac Teo contributed to this report.