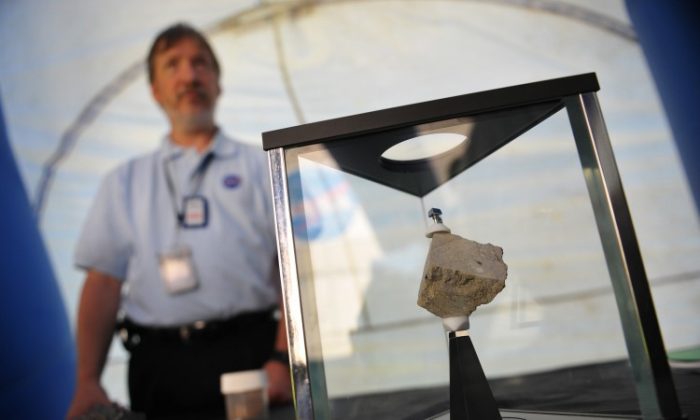 A fragment of a meteorite from Mars on display. (MANDEL NGAN/AFP/Getty Images)
Science

Complex hydrocarbons inside several meteorites from Mars did not originate from biological processes but instead from cooling lava, according to a new international study to be published in Science on May 25.

Carbon macromolecules are the building blocks of life on Earth and scientists have been seeking evidence for these and Martian life since NASA’s Viking program launched in the 1970s.

Organic carbon found inside meteorites from Mars has previously been attributed to a variety of sources, including contamination from other meteorites or Earth.

The researchers studied 11 meteorites, including the Tissint meteorite that landed in the Moroccan desert in 2011, covering a 4.2-billion-year period of Martian history overall.

They found that 10 of them contained complex hydrocarbons encased inside crystallized magma from the Red Planet’s interior.

“These findings show that the storage of reduced carbon molecules on Mars occurred throughout the planet’s history and might have been similar to processes that occurred on the ancient Earth,” said study lead researcher Andrew Steele at the Carnegie Institution for Science in Washington, DC, according to a press release.

“Understanding the genesis of these non-biological, carbon-containing macromolecules on Mars is crucial for developing future missions to detect evidence of life on our neighboring planet.”

In a separate study, Steele’s team examined a meteorite called Allan Hills 84001 that supposedly contains remains of ancient Martian life, but found it may have been formed by non-biological reactions involving graphite.

Both findings could help future Mars missions to identify non-biologically formed molecules while searching for evidence of life.

“The ubiquitous distribution of abiotic organic carbon in Martian igneous rocks is important for understanding the Martian carbon cycle and has implications for future missions to detect possible past Martian life,” wrote the authors in their study abstract.