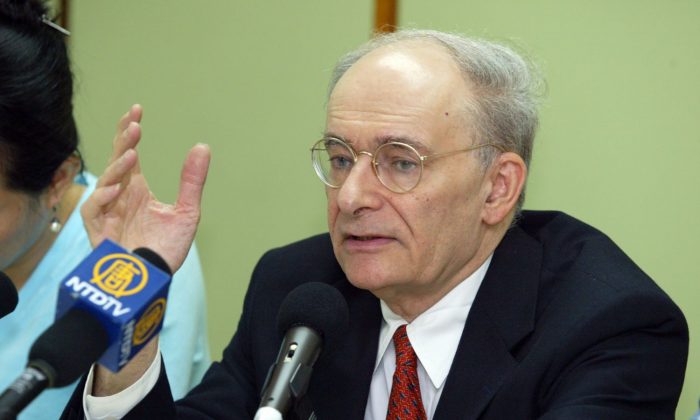 David Matas
Canadian Human Right Lawyer
David Matas, an awarded Canadian human right lawyer and appointed member of the Order of Canada, serves on the board of directors of The International Centre for Human Rights and Democratic Development of Canada, In 2010 he was nominated for the Nobel Peace Prize for his work related to the investigation of forced organ harvesting crimes against Falun Gong practitioners in China. Matas co-authored Bloody Harvest: The Killing of Falun Gong for their Organs and co-edited State Organs_Tranplant Abuse in China.
View profile
Follow
biggersmaller
Print

The Government of China, by its own admission, has been sourcing organs from prisoners in large numbers, in violation of international ethics.  Research that David Kilgour and I have done has concluded that these prisoners who have been sourced for organs are primarily prisoners of conscience and primarily, amongst those prisoners of conscience, practitioners of the spiritually based of exercises Falun Gong.  Ethan Gutmann, Kirk Allison and others, conducting their own independent research, have come to the same conclusion.

There are many patients in Korea who have gone to China for transplants. They then return to Korea for aftercare.  Transplant tourism of patients from Korea to China is an abuse which needs a remedy. What is to be done?

I have ten suggestions.  But my suggestions are not mine alone. Every suggestion I make here has been adopted elsewhere. Korea needs to adopt them, to avoid any complicity in this form of abuse.

The suggestions can be bunched into two groups. In one group is a set of standards coming from The Transplantation Society, an international association of transplantation professionals.

The Transplantation Society has developed a specific policy in relation to China, to prevent complicity of the global transplant profession with transplant abuse in China.[1]  The elements of this policy should be incorporated into the professional ethics of the Korean Society for Transplantation.

“The Transplantation Society is opposed to the recovery of organs from executed prisoners. It is a fundamental principle for The Transplantation Society that organs and tissues are given freely and without coercion. Because of the restrictions in liberty in a prison environment, it is unlikely that prisoners are truly free to make independent decisions and thus an autonomous informed consent for donation cannot be obtained. Further, the financial incentive for recovering organs from executed prisoners may become an incentive to increase the number of such organs available for transplantation.”[2]

4) I am told that many Chinese transplant professionals receive training in Korea.  According to The Transplantation Society ethical statement, trainees from China should not be accepted unless the trainers can be satisfied that the clinical careers of those being trained will comply with the transplantation ethics in general and staying away from the recovery of organs from prisoners in particular.  The Korean Society for Transplantation needs an explicit policy in place to ensure respect for that standard.

5) Korean transplant professionals should be wary of going to Chinese transplant congresses.  Attendance is ethical, according to the ethical principles set out by The Transplantation Society, only if it is used as an opportunity to convey ethical standards, including acceptable sources for organs.

A second group of suggestions I have to make comes from examples set by other jurisdictions. I will refer to examples set by the Taiwan, the United States, Israel, Hong Kong and Malaysia.

6) First, in this group, is the need to know the extent of the problem.  Transplant tourism from Korea into China has been large, but how large?

Patients who return from China to Korea with transplants need after care. They need a continuing supply of anti-rejection drugs.  So the volume of transplant tourism from Korea into China is easily knowable.  But right now it is not known.

According to a Taiwanese law, enacted this year, every doctor must file a report with the Government for any patient who receives a transplant overseas and carries out follow‑up treatment in the country. Both doctors and hospitals are subjected to fines if they fail to submit reports.[3]

7) Second, brokerage should be prohibited.  Organ brokers are operating openly in Korea, promoting the business of transplant tourism. Israel provides an example of the exact opposite, a law prohibiting transplant brokerage.  That law provides that

“no person shall act as a broker between donor and recipient, directly or indirectly, for the removal or transplant of an organ, if a reward … has been promised to another person for the organs removal, nor shall anyone receive a reward for brokerage in the said circumstances.”[4]

Again, Korea needs such a law.

8) Anyone complicit in organ transplant abuse should be denied entry into Korea. The United States provides an example of such a prohibition.  Their application for non-immigrant visa forms asks this question:

Have you ever been directly involved in the coercive transplantation of human organs or bodily tissue?”[5]

The very asking of the question tells about US immigration policy. US will deny entry to anyone who has ever been directly involved in the coercive transplantation of human organs or bodily tissue.

9) The Code of Professional Conduct for the Guidance of Registered Medical Practitioners of the Medical Council of Hong Kong addresses the issue of referrals outside Hong Kong. It provides:

35.4 In the case of referral of the recipient to a place outside Hong Kong for an organ transplant from any donor, it is unethical for a doctor to make the referral without ascertaining the status of the donor or following these principles.”[6]

There needs to be something similar for Korea. It should be considered unethical for Korean medical practitioners to refer patients to China for transplants unless the Korean medical practitioner can be certain, beyond a reasonable doubt, that the source of the organ for transplant is not a prisoner.  Given the lack of transparency about transplants in China, that certainty will exist in few, if any, cases.

10) Finally from Malaysia, we have an example of an anti-rejection drug policy.  Malaysian Health Minister Datuk Seri Liow Tiong Lai in October 2011 said

“patients in the country who undergo organ transplant operation commercially overseas without the approval of the Ministry of Health would not be supplied with anti‑rejection or immunosuppressant medicine for free from January 2012”.[7]

Again Korea needs something similar. The Korean Ministry of Health should commit not to supply Korean patients who undergo organ transplant operation commercially overseas without the approval of the Ministry of Health with anti‑rejection or immunosuppressant medicine for free.  Moreover, that approval should not be given unless it can be established that the organ sourcing was proper.

These suggestions are not meant to be comprehensive. There are many other initiatives that foreign and international professional associations, governments and legislatures have taken to avoid complicity of their nationals in Chinese organ transplant abuse. For instance, in a speech I gave to the Chamber of Deputies for Italy in Rome in October 2015, I set out thirty five ethical standards national transplantation societies should follow, all drawn from either national or international standards.[8] Here I have set out only five.

Korea is an important player in this issue, because it has been a high volume source of transplant tourists into China.  And Korea to date has, to my knowledge, adopted none of the precautions that other countries and professionals elsewhere have adopted.  Korea needs to take cognizance of the seriousness of the abuse and assume responsibility for its own past complicity in it. While Korea can not on its own end transplant abuse in China, it can and should refuse to do anything to aid that abuse.

No healthy person should be killed for his or her organs so that a sick person can live. It is inexcusable for doctors to pursue the health of their patients at the costs of the lives of strangers.

One reason, amongst many, that David Kilgour and I came to the conclusion that Falun Gong were being killed for their organs is that every precaution which could be in place to prevent that abuse was not in place. That absence is slowly dissipating. Now there are some means of prevention that some countries and professionals have adopted.  Korea should follow the examples already set elsewhere.

The Government of China now says variously that its sourcing of organs from prisoners either has ended or will end.  Given the lack of transparency of the Chinese organ transplant system, these claims are unverifiable.

That onus can not be met by mere assertions of proper sourcing, particularly in light of the long and substantial history of improper sourcing.  Unless and until China adopts a transparent system of organ sourcing, unless and until there is an independent, international verification of proper Chinese organ sourcing, the default working assumption for China has to be that organs are being sourced improperly.

Even if sometime in the future we could be satisfied beyond a reasonable doubt that all abusive organ sourcing in China has ended, that end is not a justification for omission of precautions against organ transplant abuse. We know it happened and did not do what we could to stop it. We should learn from that sorry experience and, better late than never, lay in our defences against complicity in further abuse.

David Matas is an international human rights lawyer based in Winnipeg, Manitoba, Canada.

David Matas
Canadian Human Right Lawyer
Follow
David Matas, an awarded Canadian human right lawyer and appointed member of the Order of Canada, serves on the board of directors of The International Centre for Human Rights and Democratic Development of Canada, In 2010 he was nominated for the Nobel Peace Prize for his work related to the investigation of forced organ harvesting crimes against Falun Gong practitioners in China. Matas co-authored Bloody Harvest: The Killing of Falun Gong for their Organs and co-edited State Organs_Tranplant Abuse in China.