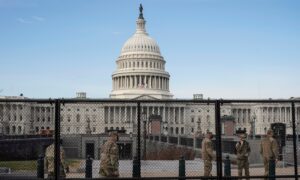 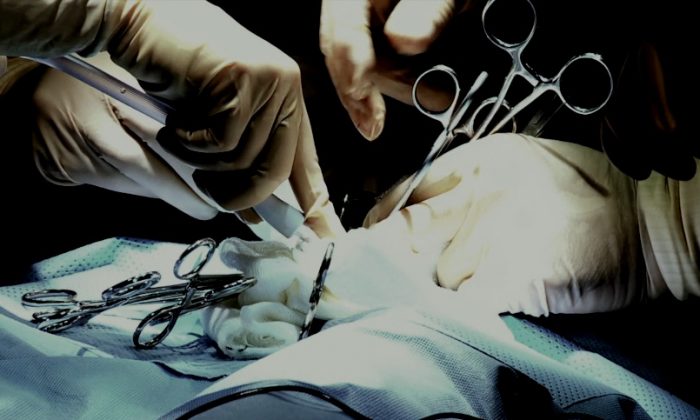 Screenshot of "Davids and Goliath," a documentary movie about organ harvesting from live prisoners of conscience. The film won best documentary at the Hamilton Film Festival in Canada on Nov. 9, 2014. (Epoch Times)
Opinion

My wife and I first encountered organ harvesting (the removal of vital organs from unwilling, living victims who were killed in the process) in summer 2006 when visiting our friend David Kilgour in Ottawa. Kilgour was, along with colleagues, accumulating evidence regarding this abuse—one notably directed against Falun Gong practitioners by Chinese Communist officials.

We were appalled—and at first skeptical—at a reported abuse that initially appeared more akin to propaganda science fiction horror stories than standard medical procedure performed by skilled surgeons who must have discarded their commitment to medical ethics of “first do no harm.”

While providing some tertiary editing assistance, however, we became convinced that the horrible was happening. It was organized and directed by Chinese leaders unable to claim ignorance. The logic was implacable: There were just too many transplants to be the consequence of prisoner executions or families volunteering their brain-dead relatives.

The logic was implacable: there were just too many transplants to be the consequence of prisoner executions or families volunteering their brain-dead relatives.

The proof for this terrible abuse was (and remains) circumstantial; direct evidence is elusive. It remains rather unlikely that a Falun Gong victim come back to life to display those gaps where living organs were removed.

Kilgour and his colleagues performed an invaluable act of existential justice in bringing organ harvesting, and the complicity of Chinese Communist officials, to global attention. The abuse was and continues to be a problem identified for investigation in the U.S. Department of State’s annual human rights report.

Not even Beijing officials could blithely deny that such was occurring, and murdered Falun Gong practitioners were the proximate source for these organs.

Of course, they did deny it.

They banned organ transplants for foreigners. And reportedly ended the use of organs from executed prisoners. There was a paper blizzard postulating reforms.

Unbiased observers bluntly rejected the claim, contending inter alia that the annual transplant numbers in China are massively higher than PRC officials announce (60,000–100,000 versus 10,000). Nor can the bland statements by PRC officials be taken at face value considering Beijing’s historical record of institutionalized mendacity.

More essentially, there is no transparency in the Chinese transplant system to permit investigation and/or confirmation of Beijing’s claims.

Nevertheless, the essential issue remains stark: how we can end the abuse. Many thousands of Falun Gong, Uyghurs, Tibetans, and House Christians have been killed for their organs. It is an abuse that is not like the Holocaust in its dimensions but certainly unacceptable in 21st-century foreign relations. It must end.

The most potentially effective approach—despite previous frustration—continues to be intense private discussion with senior PRC officials. Coordinated and repeated demarches by concerned states have been employed on other topics. China is a top-down society; change comes by central government fiat, not private persuasion. Public “naming and shaming” is more likely to prompt intense defenders for the indefensible—as well as flat denials.

It would be more effective to connect individual abusers to specific cases of transplant killings (and corrupt payoffs to facilitate the process). President Xi Jinping makes rooting out corruption a personal fetish. Killings for organ-money is a made-to-order topic for Xi. It would be both popular and justified, especially as fat-cat Chinese are now benefiting.

One could imagine a worldwide market for organs that would help resolve organ shortages. In such a stock market, prospective donors (or families of someone about to die) would be listed along with particulars of the organ and projected prices. Volunteers would be carefully vetted to assure honest buyer/seller relations.

Ultimately, the answer may lie in cloned, biologically grown organs, but such are more likely to be available in 50 years, while transplants are today’s temporary answer.