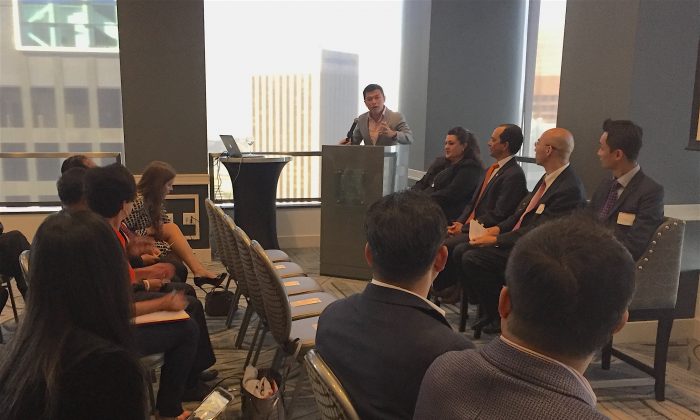 LOS ANGELES—A disagreement about the atrocity of forced organ harvesting in China broke out in an unusual venue, a forum on international trade.

China is the Los Angeles Customs District’s number one trading partner, accounting for more than half of all activity at its ports. China is also the largest trading partner with the United States as a whole.

On May 8, the 4th Annual Consul Generals Dinner was held at City Club Los Angeles. Prior to the dinner, the World Trade Center Los Angeles hosted a trade commissioners forum to discuss “The Impact of International Trade.”

“California just took over as the fifth largest economy in the world, surpassing the UK. So this is the power of this region,” Cheung said during the forum. “This position is predicated upon our international relationship with our investors, with our international trading partners.”

The Epoch Times asked Haiyan Liu, Senior Commercial Consul for the Chinese Consul General in Los Angeles, about forced organ harvesting from prisoners of conscience in China, but he denied it was a problem.

“I think the Chinese government has made a statement about the issue you mentioned, and it’s no longer an issue right now,” said Liu.

However, another member of the audience immediately stood up and said there was indeed evidence from respected media groups that the harvesting of organs from prisoners of conscience was still happening in China.

“If you have proof, we can [conduct] a criminal prosecution. We can start that kind of procedure,” said Liu in response.

Liu later declined to speak one-on-one with the reporter from The Epoch Times.

Evidence for the state-sanctioned forced organ harvesting of prisoners of conscience in China has been published and made publicly available online by distinguished independent researchers for over a decade.

According to the 2016 report “Bloody Harvest/The Slaughter: An Update,” co-authored by former Canadian Secretary of State (Asia/Pacific) David Kilgour, human rights lawyer David Matas, and award-winning China analyst Ethan Gutmann, practitioners of the spiritual discipline Falun Gong (also called Falun Dafa) have since 2000 been the main source of transplanted organs in China, with large numbers of practitioners having been harvested.

These prisoners of conscience are blood and tissue tested, then executed on demand for their organs to be sold.

In 2016, the U.S. House of Representatives unanimously passed a resolution expressing concern about the “persistent and credible reports of systematic, state-sanctioned organ harvesting from nonconsenting prisoners of conscience in the People’s Republic of China.”

After the forum, Cheung said the WTC’s expertise and focus is on international trade in terms of bringing investment to Los Angeles, so addressing these kinds of concerns about China is not part of their work.

However, Cheung said that as a human being, he hoped to learn more about the forced organ harvesting allegations against the Chinese regime.

Following the forum, the Consul Generals Dinner was held, with a discussion on the topic of “Medical Tourism: An International Health Perspective.” Edwin McCarthy, vice president of the Center for International Medicine at City of Hope, was on the panel of experts.

McCarthy said City of Hope is focused on cancer treatment, and the only transplants conducted at the hospital are bone marrow transplants. But he was aware of the organ harvesting issue in China, where medical tourists from other countries often go to get an organ transplant.

“In my understanding, this is not a new discovery. This is something that’s been documented in the past,” he said. “I believe it’s important that that type of activity continues to have the light shown on it so that it’s not ignored or dismissed.”

Meral Duran, the executive director of the West Coast Turkish-American Chamber of Commerce and an EU political advisor, who was on the panel of the trade commissioners forum, said she was also aware of organ harvesting in China.

“In Europe, we are the land of the rule of law, we talk about human rights, of course we are … looking at that deeply and carefully,” she said.