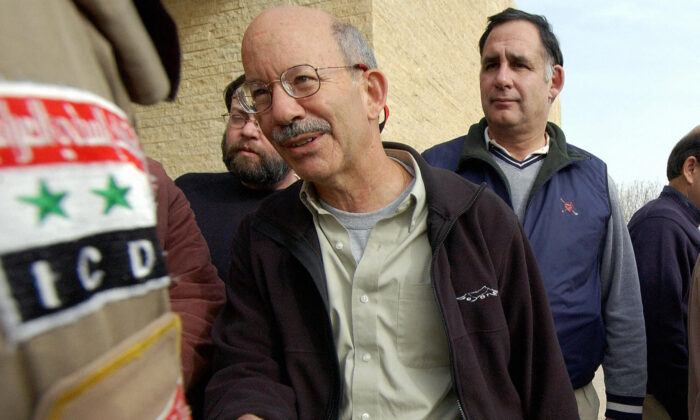 Oregon’s 4th Congressional District is in play for the first time in 35 years after the retirement of Rep. Peter DeFazio (D). DeFazio is pictured in Iraq, on Jan. 25, 2004. (Jewel Samad/AFP via Getty Images)
Politics

As of early May 18, Salinas led with 38 percent of the vote, compared to 19 percent for Carrick Flynn, the next-closest candidate, who conceded the race within hours of polls closing. If elected in November, she would become the state’s first Latina member of Congress.

One of the most expensive primaries in the nation, the contest for the new seat pitted the Congressional Hispanic Caucus’ campaign arm against House Democrats’ flagship super PAC, which is closely aligned with House Speaker Nancy Pelosi (D-Calif.).

The race attracted more than $6 million in spending by a new cryptocurrency-backed super PAC known as Protect Our Future to support Flynn. The House Majority PAC also pledged $3 million in support of Flynn, drawing the ire of other candidates.

Sen. Elizabeth Warren (D-Mass.) endorsed Salinas, who will likely will face Republican nominee Mike Erickson, who was edging out seven contenders with about 34 percent of the vote, with 57 percent counted.

Encompassing the capital city of Salem, portions of Portland suburbs, and all of Polk and Yamhill counties, the new district leans Democratic, so Salinas will be favored in the fall.

Meanwhile, Oregon’s 4th Congressional District is in play for the first time in 35 years.

When Rep. Peter DeFazio, a Democrat, announced his retirement last year, it set up a rare opening in Oregon’s congressional delegation. Alek Skarlatos, who ran unopposed in the Republican primary, is seeking to seize on the opportunity.

A former Oregon National Guardsman who rose to prominence after helping to stop a terrorist attack on a Paris-bound train in 2015, Skarlatos ran the closest race ever mounted against DeFazio in 2020, coming within 5 percent.

Former Oregon labor commissioner Val Hoyle, who collected 66 percent of her party’s votes, will represent the Democratic Party in the general election. Hoyle was endorsed by DeFazio, as well as U.S. Sens. Jeff Merkley and Ron Wyden, the Planned Parenthood PAC, Oregon’s AFL/CIO, as well as the carpenters, nurses, and teachers unions, among others.

She pledges to “tackle the climate crisis” by moving America to a 100 percent clean energy standard and halting all new fossil fuel leases on federal public lands, according to her campaign website.

The redrawn boundaries of the 4th District give Democrats a nine-point advantage in the general election, according to FiveThirtyEight.

Incumbent U.S. Rep. Kurt Schrader appears headed for defeat in the 5th Congressional District primary. As of the afternoon of May 18, Democratic challenger Jamie McLeod-Skinner led with 61 percent of the vote, with roughly 53 percent of precincts reporting, even with Schrader having the endorsement of President Joe Biden.

Criticized by progressives in his party, Schrader, who casts himself as a moderate, has represented the district since 2008.

In the 1st District, Republican Christopher Mann secured more than 69 percent support to set up a fall contest against 10-year incumbent Suzanne Bonamicci, who won with more than 90 percent Democratic support.

In the 2nd District, incumbent Cliff Bentz, Oregon’s only GOP congressman, has fended off two challengers, securing 76 percent of the vote.

The mostly rural district—which is the seventh largest in the nation and covers two-thirds of the state—is “safe Republican” according to commentator Krystal Ball, while the Cook Report names it a “solid Republican” seat.

Democrat Earl Blumenauer, who has served in the House since 1996, easily defended his seat in the 3rd District, receiving nearly 95 percent of the votes. He’ll face Republican Joanna Harbour, who ran unopposed for her party’s nomination.