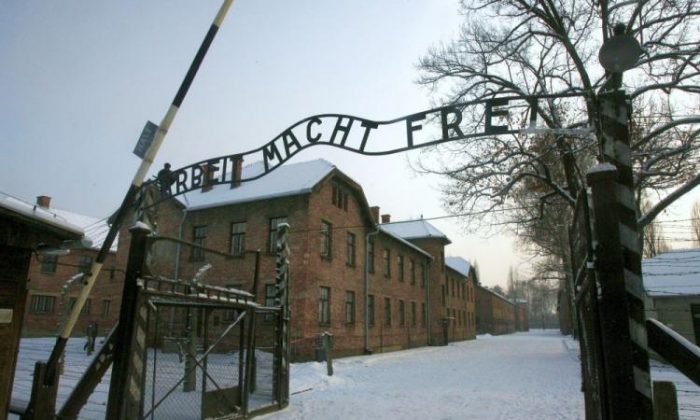 A replica hung in place of the stolen infamous 'Arbeit macht frei' sign at the former Nazi death camp Auschwitz in Oswiecim, Poland, on Dec. 18, 2009. (Jacek Bednarczyk/AFP/Getty Images)
US News

Oregon Will Require Schools to Teach Students About the Holocaust

Oregon lawmakers have voted to pass legislation that would it make it a requirement for schools in the state to educate students about the atrocities committed during the Holocaust and other genocides.

The bill, which was passed unanimously by the state chamber on May 28, will require schools to teach about the Holocaust starting in the 2020-2021 school year.

Under the legislation, Oregon high schools will be required to include “specific references to the Holocaust and genocide” into their social studies curriculum, Oregon House said in an announcement (pdf).

The move comes as a recent poll found that one in five millennials in the United States admitted they were unfamiliar with the Holocaust.

In a statement, Oregon Rep. Janeen Sollman, a chief sponsor of the legislation, said the bill is about “keeping history alive,” and preventing such atrocities from happening again.

“As we lose our lived history from that era, it becomes even more important to have Holocaust and genocide education in our classrooms,” Sollman said in the announcement.

Oregon schools will be required to teach about the Holocaust. A 14-year-old made it happen. https://t.co/KEtMUxseP2

“This legislation is about ensuring that our students learn about our true history, learn to appreciate and understand our survivors’ stories, and continue to tell those stories to prevent such actions again.”

The curriculum will be implemented in school districts with the help of the Oregon Department of Education, which will provide technical assistance.

Sollman added that the bill is also in honor of Holocaust survivor Alter Wiener, who was killed last December in a traffic accident aged 92.

Wiener had spent three years in concentration camps, including the one in Auschwitz during the German occupation, and was the only member of his family to survive the Holocaust. When he was liberated in 1945, he weighed just 80 pounds.

Towards the end of his life, he had been working to convince state lawmakers to create and pass the bill, dubbed the Genocide Curriculum bill.

According to the announcement, 13-year-old student Claire Sarnowski from Lake Oswego initially brought forward the idea for the legislation.

Sarnowski said, “Alter’s dream was to mandate education which would continue the legacy of the Holocaust and genocides.”

The high school student first met Wiener around four years ago, when she attended one of his talks and they became friends, according to the Lake Oswego Review.

“Although he is not here with me today, he prepared me to carry on this mission and to persevere in making this a reality … We need to ensure these atrocities are never forgotten nor ignored,” she added.

As a Jewish kid, I never learned about the Holocaust once in Portland Public Schools so this is huge.https://t.co/CR9ZGbu5rV

A signature is now needed from Democratic Gov. Kate Brown’s desk, and if signed, Oregon would be joining 10 other states to pass legislation requiring schools to teach students about the Holocaust and other genocides.

Rise in Anti-Semitic Attacks in the United States

The move comes as the United States has seen a recent spike in anti-Semitic attacks across the country.

This year, hate crimes have spiked by 67 percent in the first quarter of the year across New York, with anti-Semitic incidents taking top place, according to the NYPD.

Last month, one person was killed and three others were wounded after a 19-year-old gunman opened fire at a synagogue in California.

The attacker, named John Earnest, burst into the synagogue in Poway, north of San Diego, just after it had hosted a Passover celebration.

The incident came just six months after a shooting in Pittsburgh, which killed 11. The shooting is thought to be the worst anti-Semitic attack in recent U.S. history.