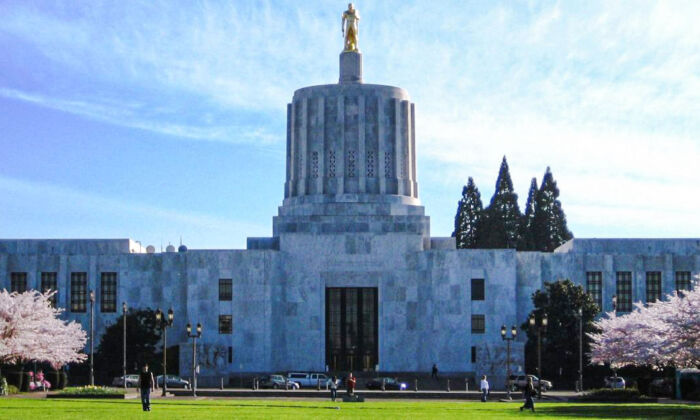 The Dec. 13 special session was convened in response to a Nov. 30 request from Gov. Kate Brown, a Democrat, who had called legislators back to the Capitol to address a pandemic-related rental relief program after the state ran out of federal funding.

“Tens of thousands of Oregon renters have applied for rental assistance,” said Brown.

“While we have made significant progress in improving the delivery of rental assistance in the last several weeks, we know that renters and their landlords are counting on these additional state resources and that we must move quickly.”

In the ensuing weeks, legislators expanded the agenda through bipartisan negotiations.

During the one-day session, the Legislature allocated $215 million to prevent pending evictions and transition to locally delivered eviction prevention services, recoup lost rent for landlords, and help agencies that have been criticized for not getting emergency money out the door more quickly.

Oregon Housing and Community Services (OHCS) said it distributed more than $381 million in emergency rental assistance in the past 11 months, more than every year in the prior decade combined.

This month, the statewide rental assistance program stopped taking new applications after all $289 million of federal funds have been committed to renters. Due to a backlog, $119 million has yet to reach renters.

“We are quickly processing as many applications as possible so that landlords can be made whole, and tenants can remain safely and affordably housed,” OHCS Executive Director Margaret Salazar said in a statement provided to The Epoch Times.

Republican lawmakers have been critical of the service’s “mismanagement” of the application backlog and said the agency must be held accountable.

State Rep. Christine Drazan, a Republican and candidate for governor, called on Brown to fire Salazar, saying the agency’s efforts at distributing rental assistance money had been “grossly inadequate.”

“This unnecessary special session was called because of yet another state agency failure,” Republican House caucus leader Vikki Breese-Iverson said in a statement.

“For months, the agency failed to distribute timely relief to renters and property owners, promising improvements that never came despite millions of dollars from the Legislature.”

Legislators also approved a $100 million drought relief package to support farmers and ranchers across the state, who have been affected by drought, heat, or fire. They further instructed the Oregon Department of Agriculture (ODA) to establish a new disaster assistance program.

“Over the last two years, Oregon has experienced one natural disaster after another, with the pandemic on top of all of that,” ODA Director Alexis Taylor said in a public statement.

“I have heard from so many Oregon farmers and ranchers who are concerned how they will make it through next year. The funds will keep many operations afloat until the USDA develops its federal disaster program that is expected to be announced by mid-2022,” she said.

“The Oregon Farm Bureau and our partners have been working toward this package since early this summer, and we are grateful that the Legislature was able to secure its passage today,” added Mary Anne Cooper, vice president of government affairs at the Oregon Farm Bureau. “Relief to producers impacted by this year’s natural disasters cannot come soon enough.”

Advanced by Republicans, the Legislature allocated $25 million to address the proliferation of illegal cannabis cultivation across the state.

The funding package will help counties hire the law enforcement, and water masters, required to oversee the huge task they have in front of them, he said.

“The resources for enforcement of illicit cannabis and cannabis-related water theft are much needed, but long overdue,” state Rep. Lily Morgan, a Republican, told The Epoch Times. “This is not the final step, but it is an important one.”

“The crisis we are facing with foreign drug syndicates in Southern Oregon needs to be addressed by all levels of government: local, state, and federal,” Bentz said in an email to The Epoch Times.

“I am encouraged to hear that Oregon is working to find further resources to address these problems. I will continue to work at the federal level to draw attention to this crisis, correct perceptions regarding the problem, and continue to seek federal assistance for the region.”

“No matter how much we spend, we will continue to spin our wheels in this fight against the cartels if the southern border remains wide open,” Knopp added. “For the health and well-being of Oregon, President Biden and Congress must immediately address the humanitarian crisis at the border.”

Legislators approved $18 million to help Afghan refugees arriving in Oregon find housing, education, language and job training, and legal assistance. Oregon is one of only four states that provides funding for resettlement efforts, as the federal government works to relocate Afghans forced to evacuate.

“The [Biden] administration is providing funding to support resettlement for up to 95,000 individuals from Afghanistan … during the current fiscal year,” according to a statement on the U.S. State Department website.

The special session also approved $1 million to each of 14 cities to address affordable housing and homeless support, $2 million for gun violence prevention, and $5 million for a mass timber modular housing prototype project in Portland.