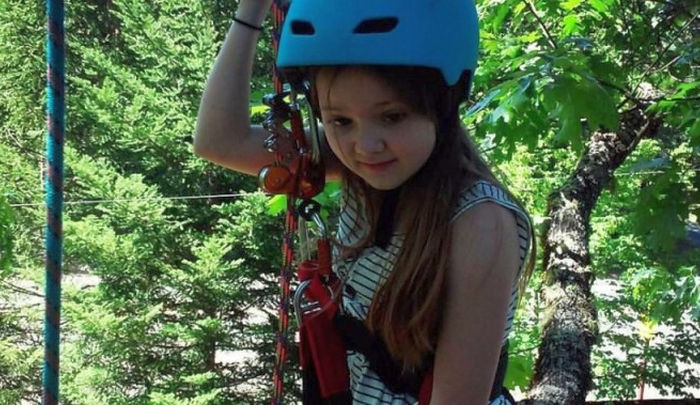 Meadow Grace Boyd, 13, who was killed while waiting at a bus stop in Rogue River, Oregon, on Oct. 30, 2017. (GoFundMe/Burial & Memorial for Meadow Boyd)
Crime and Incidents

A hit-and-run driver struck and killed a 13-year-old girl as she was waiting at a school bus stop in Jackson County, Oregon, this week.

Meadow Grace Boyd was hit by a passing vehicle in Rogue River at around 7:30 a.m. on Monday, Oct. 30 the Jackson County Sheriff’s Office said.

“She was struck by a vehicle part or other object extending from the side of a vehicle,” the sheriff’s office said. “Possible examples include, but are NOT limited to, a side mirror, top or side mounted racks, trailer parts, or cargo items.”

A number of people have sent in surveillance footage or called in about the incident, detectives said.

“Investigators believe it is likely a driver would be aware he or she struck something on the side of the road,” the sheriff’s office said. “The driver may not, however, have realized the object was a person. Several trash cans lined the edge of the roadway in the same area where Meadow had been standing. The incident occurred before sunrise; conditions were dark and foggy.”

Detectives who were in contact with the girl’s family shared details about her life.

“While Meadow was small in stature, her family described her as a ‘protector’—someone who helped and supported people who were bullied,” the sheriff’s office added. “Meadow’s family members are hoping someone will come forward with information to help them understand what happened to her.”

The office wrote, “Meadow was the youngest of four siblings. She enjoyed spending time in the outdoors, rock climbing, and reading. Meadow had a dog named Wicket and she loved horses.”

Jackson County sheriff’s Sgt. Julie Denney told the Mail Tribune that the incident is “kind of an unusual circumstance.”

“We definitely want to hear from more people if they have something to share,” Denney said.

According to a GoFundMe page set up for the girl’s family, “No parent ever plans for this kind of situation, and we send out a measure of gratitude for those who have expressed sympathy for our pain and a desire to do something more.”

Those with information about this case are being asked to call detectives at 541-774-6800.