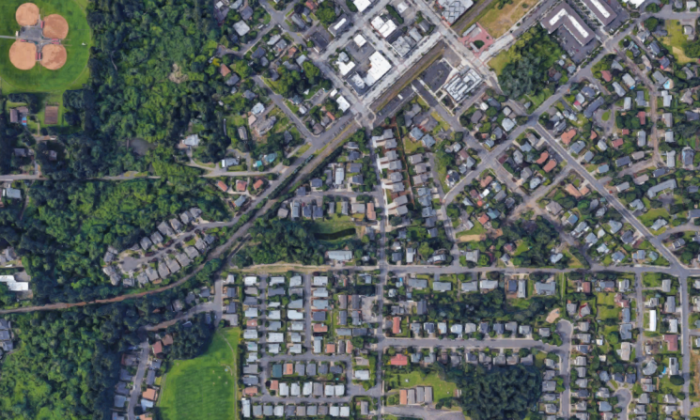 The area surrounding the 23000 block of SW Main Street in Sherwood, Ore., where a teen allegedly killed himself while playing Russian roulette. (Screenshot via Google Maps)
Crime and Incidents

An Oregon teenager killed himself while playing a game of Russian roulette.

The teen showed up at a mobile home in Sherwood, Oregon, with a gun. He then proceeded to play Russian roulette by himself, KOIN reported citing police witness interviews.

The teen was already dead by the time police arrived at 4 a.m. at Carriage Park Estates, a mobile home community. The boy’s body was removed after the medical examiner arrived on the scene.

Police initially responded to a report of a suicide with a weapon, but additional calls to 911 said that the teen was playing Russian roulette.

Sherwood Police Capt. Ty Hanlon told KOIN that there was at least on “click” of the weapon before it fired. Police described the handgun as a .357 revolver. The gun was not fully loaded. It is unclear where the gun came from and how the teen got it.

“It appears that he brought a handgun with him and from witnesses accounts that he was playing a game known as Russian roulette,” Hanlon said. “We believe that he showed up and initiated this all on his own.”

Sherwood Police now probing background of teen shot dead during game of Russian roulette to determine if he was suicidal. https://t.co/qAzAFW2iKg #KOIN6News pic.twitter.com/dVL9ik0XGi

Russian roulette is “an act of bravado consisting of spinning the cylinder of a revolver loaded with one cartridge, pointing the muzzle at one’s own head, and pulling the trigger,” according to the Merriam-Webster dictionary.

Several other young adults were present when the teen shot himself, according to Hanlon. All were around 20 years of age. The deceased teen was related to those present and is believed to be from Marion County.

Police are now looking into the boy’s background to determine if he had any suicidal tendencies.

Sherwood Police now confirm, based on witness interviews, that a teen boy showed up to mobile home with gun, played Russian roulette and fatally shot himself. https://t.co/qAzAFW2iKg #KOIN6News pic.twitter.com/UGo8Kio37F

Ken McPherson, a neighbor who lives nearby, told KOIN he didn’t hear the shooting. McPherson said teens regularly hang out at the home where the shooting occurred, but that there has never been any trouble.

“It’s usually kids younger than 20 that I see down there,” McPherson said.

Police are interviewing the other people present at the time of the incident to attempt to determine the cause.

The victim’s name has not been released and police described him as being in his mid-teens, according to the Sherwood Gazette.