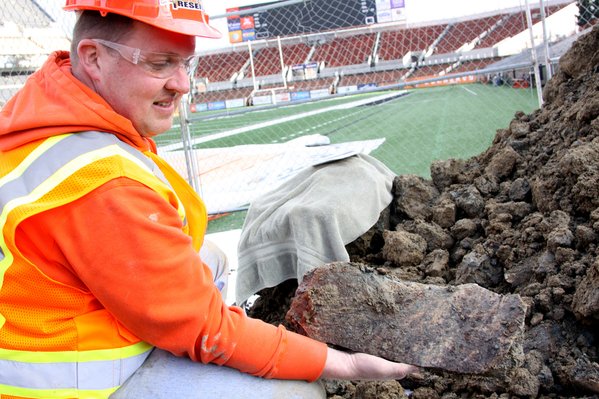 Workers digging for a project to expand Oregon State University’s football stadium were startled to stumble across 10,000-year-old mammoth bones.

The construction crews uncovered a large femur bone, and later found more bones from several extinct mammals, including some kind of camel or horse.

“There are quite a few bones, and dozens of pieces,” said Loren Davis, an associate professor of anthropology at OSU who was called to the site after the initial discovery was made, in a statement. “Some of the bones are not in very good shape, but some are actually quite well preserved.


The area could have once been a bog or marsh, and the collection of animals likely included many that went to die there.

“Animals who were sick would often go to a body of water and die there, so it’s not unusual to find a group of bones like this,” Davis said. “We had all of these types of animals in the Willamette Valley back then.”

Since the find doesn’t involve humans or human artifacts, the bones are not considered part of an archaeological site—but OSU officials have moved crews to another area to allow further examination of them.