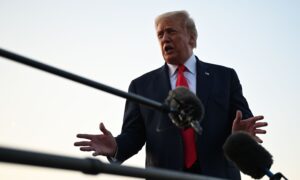 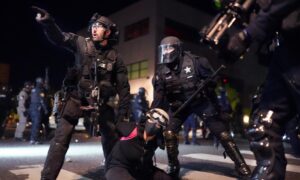 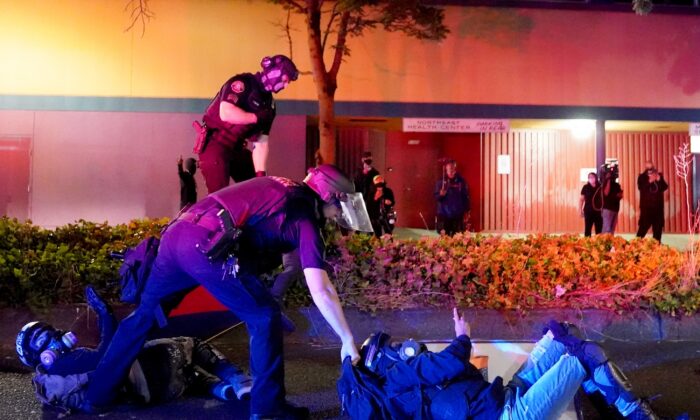 Oregon State Police Pull Out of Portland as Rioting Continues

Troopers were helping quell the unrest that has consumed portions of the city since May 28.

Capt. Timothy Fox, a state police spokesman, told The Epoch Times that the decision stemmed from the district attorney overseeing Portland deciding not to pursue some criminal charges.

“The Oregon State Police is continually reassessing our resources and the needs of our partner agencies and, at this time, we are inclined to move those resources back to counties where prosecution of criminal conduct is still a priority,” Fox said in an emailed statement late Thursday.

The state police had also fulfilled their commitment to a two week stint that ended on Aug. 12, he added.

“Troopers are returning to the communities that they are assigned to serve and protect. We will continually assess our resources if our partners at PPB need OSP assistance,” he said.

The Portland Police Bureau, or the PPB, has struggled to deal with the tumult that’s consumed the city almost every night in the past two-and-a-half months. Rioters, some linked to the far-left Antifa network, have repeatedly attacked city, county, and federal buildings and officers as they call for defunding the police.

President Donald Trump’s administration surged federal officers to Portland on July 4 to guard a federal courthouse that local officers did not protect. Clashes between the officers and rioters drew worldwide attention.

Oregon Gov. Kate Brown, a Democrat, reached a deal with the Department of Homeland Security (DHS) on July 29 that saw state officers step in and help federal and city law enforcement respond to rioting and violent demonstrations. Since then, troopers have been seen on most nights helping control crowds.

Brown’s office and DHS didn’t respond to requests for comment.

Rioters shifted to outlying areas of the city in recent weeks, targeting a county building in east Portland and a police precinct in north Portland. On Wednesday night, they returned to the Mark O. Hatfield Courthouse, a federal structure; and the nearby Justice Center, a county edifice.

The Portland Police Bureau declared a riot because of criminal activity and dispersed the mob with tear gas and crowd control munitions.

Schmidt, the district attorney, told reporters on Tuesday that his office wouldn’t prosecute cases of a number of charges, including disorderly conduct, criminal trespassing, and riot.

Some of the violations of the law that have taken place during riots “are impermissible by any standard, resulting in physical violence, injury, and worse,” said the newly-elected district attorney, who bills himself as a progressive candidate.

“Others represent the instinctive reactions of people who have been gassed repeatedly, who have been struck with kinetic-projectile weapons, and who have seen other protesters arrested in ways they deeply disapprove of,” he added.

Portland Police Chief Chuck Lovell said in a response statement that officers are only arresting those who are committing crimes.

“The arrests we make often come after hours of damage to private property, disruption of public transit and traffic on public streets, thefts from small businesses, arson, burglary, attacks on members of the community, and attacks against police officers,” he said in a statement.