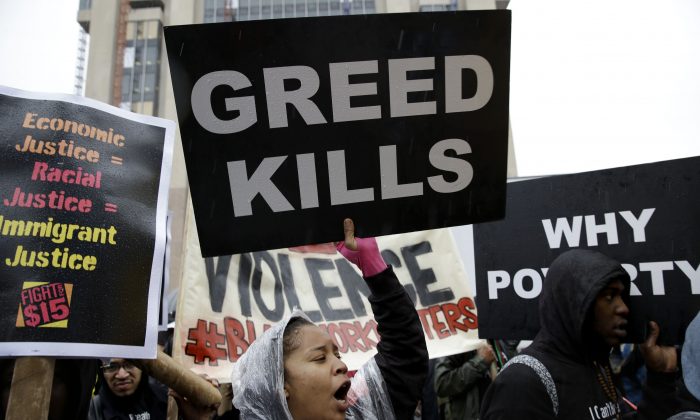 Oregon Senate Approves Bill to Increase Minimum Wage up to $14.75 an Hour

SALEM, Ore.—The Oregon Senate approved a measure Thursday that would incrementally increase the state’s minimum wage over the next six years.

Democrats pushed the bill through on a 16-12 vote, saying it would help Portland residents handle growing costs of living without hurting businesses in rural areas.

Sen. Betsy Johnson, D-Scappoose, voted with Republicans against the measure.

The proposal, introduced by Democratic Sen. Michael Dembrow, of Portland, would begin raising the current $9.25 an hour minimum in July. At that time, the Portland metro area and a group of counties including Salem and Eugene would see a 50 cent increase while a third category of rural counties would see a 25 cent increase.

The bill is similar yet separate from Gov. Kate Brown’s two-tiered approach negotiated with various stakeholders, including some business leaders, before the legislative session began. Dembrow has said the three-tiered system better serves the needs of Oregon’s farmland-laden counties in the east while addressing soaring housing and other costs of living in Portland.

Senate Republicans said in a statement that a significant increase in the minimum wage will weaken the economy and cost Oregon jobs, especially in rural areas.

Jeff Anderson, secretary-treasurer of Local 555 of the United Food and Commercial Workers Union, said in a statement the conversation about raising Oregon’s minimum wage is not happening in isolation.

“Cities up and down the West Coast already have $15 minimum wages on the books, and both Washington and California are considering ballot measures to raise the wage statewide to $13.50 or higher. If at the end of session, elected officials come up short of passing a wage high enough to support working families across the state, voters will be the ones to get the job done in November,” Anderson said.

The measure heads next to the House for consideration, where it faces another partisan battle.