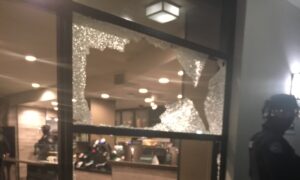 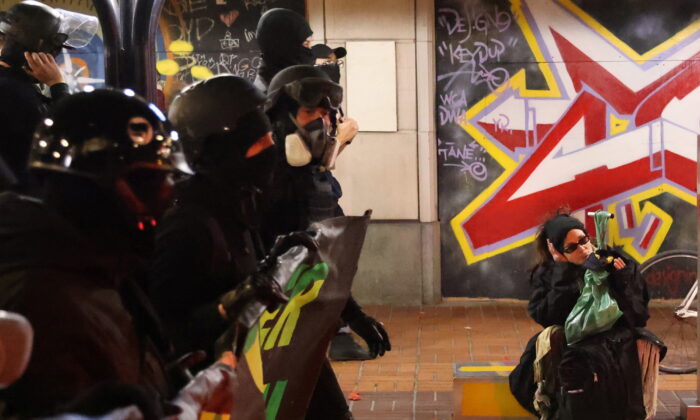 A woman sits as demonstrators protest, the day after Election Day in Portland, Ore., on Nov. 4, 2020. (Goran Tomasevic/Reuters)
Crime and Incidents

Oregon National Guard Activated After Riots Break Out in Portland

Police in the city of Portland, Oregon, made arrests and seized fireworks, hammers, a knife, and a rifle after demonstrations devolved into riots, while Gov. Kate Brown activated the state’s National Guard in response to “widespread violence” on the night following the presidential election.

The National Guard was deployed in response to major unrest happening in downtown Portland, and that they would be assisting local law enforcement “in responding to any acts of violence, and to maintain public order and ensure community safety,” officials said.

Sgt. Kevin Allen, speaking on behalf of the Unified Police Command, said in a statement issued at around 11 p.m. on Nov. 4 that a group of 150 to 200 people gathered in downtown Portland and began to march in the street, prompting police to request that they move to the sidewalk, as there had been no permit issued for a march.

“The officers were pelted with water bottles and what appeared to be paint balls. Due to this, it eventually became an unlawful assembly,” Allen said.

The Multnomah County Sheriff’s office later said in a statement that at least 11 people had been arrested in connection with the unrest.

Mike Reese, Multnomah County sheriff, said in the statement that “good police work led to the arrest of an incredibly dangerous person involved in tonight’s riot.”

The sheriff’s office initially said that a man had thrown a Molotov cocktail at police officers, though Allen later issued a correction and said the item was a firework. He added that the suspect was armed with a rifle, additional magazines, a tactical vest with ballistic plates, and a knife.

In an earlier statement, Allen denied rumors of an unmarked van being used to arrest people after a separate declaration of a riot, in which police were pelted with projectiles, including glass bottles.

“Arrestees are being transported in marked police vehicles. Some law enforcement are using unmarked vans to transport official personnel and may be seen downtown,” he said.

Demonstrations were also seen in a few other U.S. cities on the night of Nov. 4 as activists rallied in several places, including Atlanta, Detroit, New York, and Oakland, California.