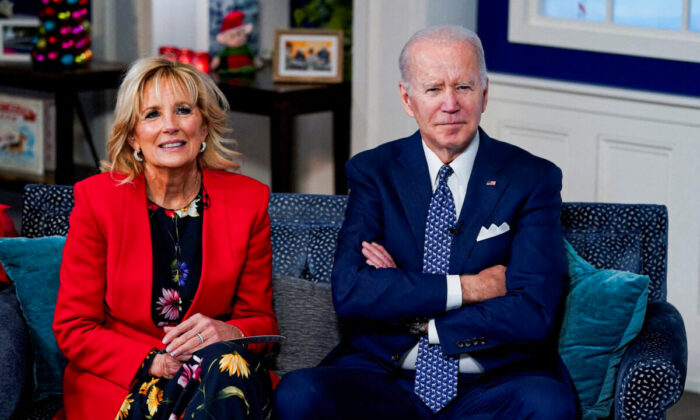 The Oregon man who drew international headlines when he told President Joe Biden “Let’s go Brandon” during a telephone call over the weekend said the comment was made in “jest” and that he’s received threats since the stunt.

Jared Schmeck, a father of four, told the Oregonian on Dec. 25 that he is “being attacked for utilizing my freedom of speech” and is now receiving threatening phone calls.

The call, which was streamed online, drew media attention, in part because of Biden’s response. He told Schmeck, “‘Let’s go Brandon,’ I agree.” Biden didn’t appear to be affected at all by Schmeck’s quip.

Schmeck, a former police officer who works for a power company, said his family typically calls into the NORAD Santa Tracker on Christmas Eve every year and didn’t know it was being livestreamed.

“I understand there is a vulgar meaning to ‘Let’s go, Brandon,’ but I’m not that simple-minded, no matter how I feel about him,” he told the outlet, adding that he has no ill feelings toward Biden. But, he argued, Biden could be “doing a better job” as president.

“[Biden] seems like he’s a cordial guy,” he said. “There’s no animosity or anything like that. It was merely just an innocent jest to also express my God-given right to express my frustrations in a joking manner. … I love him just like I love any brother or sister.”

The meme started earlier this year after an NBC Sports reporter noted the crowd’s loud chant at a NASCAR race as she interviewed driver Brandon Brown, who had just won the race. She told the driver that they were chanting “Let’s go Brandon.” The actual chant was “[expletive] Joe Biden.”

With his name now firmly stuck in the public lexicon, Brown, in an opinion article for Newsweek on Dec. 20, wrote that because of his profession, he doesn’t have “time to think about politics.”

“My job is to run the next lap faster than the last one. Politics has never been that interesting to me,” he said. “Though, like most, I have always had the impression that politicians were likely the cause of more problems than they were the solutions.”

“I have zero desire to be involved in politics,” Brown told The New York Times on Dec. 26.

He also recently told Sports Business Journal that he’s struggled to obtain corporate sponsorship deals because of the phrase.