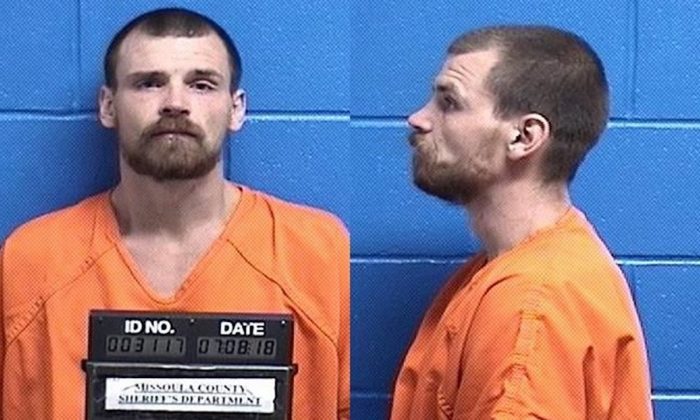 MISSOULA, Mont.—An Oregon man has pleaded guilty to charges alleging he abandoned a 5-month-old baby under a pile of debris in the woods of western Montana.

He pleaded no contest to an assault on a child charge.

The man who left a 5-month-old baby in the woods outside Lolo Hot Springs last year, spurring an hours-long multi-agency search and valiant rescue, pleaded guilty to the deed Tuesday morning in #Missoula District Court. https://t.co/8beueh44fQ

He previously pleaded not guilty to two felony charges on July 31, 2018.

Prosecutors say Crowley was under the influence of meth and bath salts when he caused a disturbance earlier this month at Lolo Hot Springs, near where he was living with the boy and the child’s mother.

He told responding officers that the baby he had been caring for was buried in the mountains, but he was unable to lead officers to the boy.

Francis Crowley, the man who is accused of leaving a baby in the woods in July, appeared before Judge Townsend Tuesday for trial scheduling. It’s set to begin Friday, March 1. pic.twitter.com/WUH753YWfz

Based on some information from Crowley, officers eventually found his car in the Lolo National Forest.

Later, a deputy and a Forest Service officer found the baby—cold, hungry and covered in debris—on July 8.

“After more than 6 hours of searching on foot, a deputy heard the faint cry of a baby,” police said in a prior statement. “He followed the sound and found the baby alive, face down, buried under a pile of sticks and debris.”

“On a more personal level, we want to take a moment to thank everyone who has played a role in this, even the smallest. Law enforcement officers can have a dreary outlook on life at times. Calls come in and you see people at their absolute worst day after day. But over the weekend, out of so much darkness came a little light. A baby was found … alive,” the office said in the statement.

The office added: “For all of us at the sheriffs office, this is what we call a miracle. For the officers who were present for this event, it’s especially hard knowing what this small baby endured in the last 24 hours. Sheriff McDermott would like to thank those who assisted in the search and those who called 911, helping first responders bring this baby to safety.”

It was estimated the boy had been left alone for at least nine hours.

Crowley said he left the baby after a car crash because he was very heavy.

Authorities say the 5-month-old infant has been released from the hospital.

The Missoulian reports the boy is in protective custody while his case is handled by the Montana Department of Health and Human Services.

Crowley is scheduled to be sentenced on March 12.