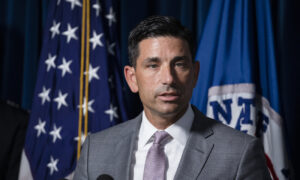 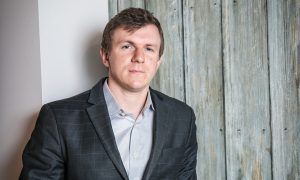 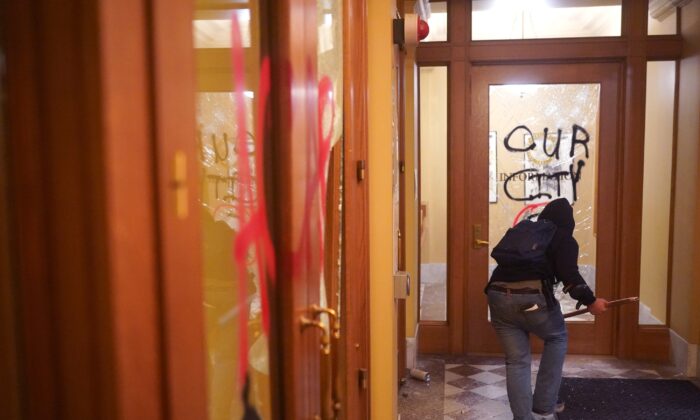 A rioter runs through the vandalized lobby of City Hall in Portland, Ore., on Aug. 25, 2020. (Nathan Howard/Getty Images)
US News

A group of about 150, many wearing helmets, gas masks, and body armor and carrying shields, descended on City Hall after 9:30 p.m. Some smashed windows and entered the building, including people marked as “press,” while others lit a fire outside.

Police officers began warning the mob to leave the area. Most ignored the warnings, so police used force to disperse them, according to a nightly incident summary from the Portland Police Bureau.

Police disengaged to try to reduce the intensity of the situation but the mob soon returned to the area, shining lasers in the eyes of officers and trying to break more windows. Just after 11 p.m., a man ignited an aerosol can while spraying it toward the city building, where security guards were inside.

Because of the threat to life, officers again dispersed the crowd. Rioters hurled eggs and bottles at them and continued shining lasers.

Clashes continued into the early hours of Wednesday.

Twenty-three people were arrested for charges including disorderly conduct, harassment, and resisting arrest. Under a new policy from Multnomah County District Attorney Mike Schmidt, most charges will likely be dropped.

Brown, the governor, said before the latest riot that she wouldn’t send help for police officers.

Republican President Donald Trump wrote in a statement that his administration wants Brown and Mayor Ted Wheeler, a Democrat, “to call up the National Guard like should have been done 3 months ago.”

Unrest has continued in Portland since May 28.

“They must stop calling these anarchists and agitators ‘peaceful protesters’. Come back into the real world! The Federal Government is ready to end this problem immediately upon your request,” Trump added.

In what appeared to be her first statement responding to similar calls, Brown said her state “isn’t interested in a role in your political theater.”

In a separate statement, Brown said: “It’s time for the violence and vandalism to end so Portland can focus on the important work to be done to achieve real change for racial justice. Those who have committed acts of violence will be held accountable.”

Homeland Security Secretary Chad Wolf said earlier this week that Brown should do one of three things: deploy National Guard members, send Oregon State Police (OSP) back to Portland, or request assistance from the Trump administration.

“Portland law enforcement is doing what they can but need help to proactively address violence,” he said.

Wisconsin Gov. Tony Evers, a Democrat, on Monday ordered National Guard troops to Kenosha just hours after a single day of rioting. He escalated the number of forces on Tuesday after riots broke out again.

Shootings have spiked in Oregon’s largest city this year and police officials have stressed the inability to respond in a timely manner to 911 calls because of the manpower needed to quell riots.

At one point on Saturday, there were only four available police cars to respond to emergency calls for service, the bureau said. Around 30 officers were trying to manage a demonstration that turned violent but even that number couldn’t properly police the groups.

During rioting Sunday night, dozens of officers were pulled from precincts to respond, leading to a backlog of between 120 and 140 calls, including shots fired, assaults, and suspicious circumstances.

Asked if police need help from the guard, Lovell said: “I think from time to time we need our partner agencies, I think the help of OSP has been huge, Multnomah County Sheriff’s Office has been a big help. I think right now, we’re in a place where I feel like we can handle the crowd control with our partners. But if that decision’s made down the road, then you know, that’s that’s a decision that gets made above my head.”