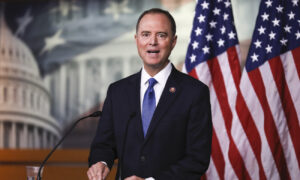 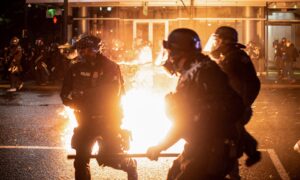 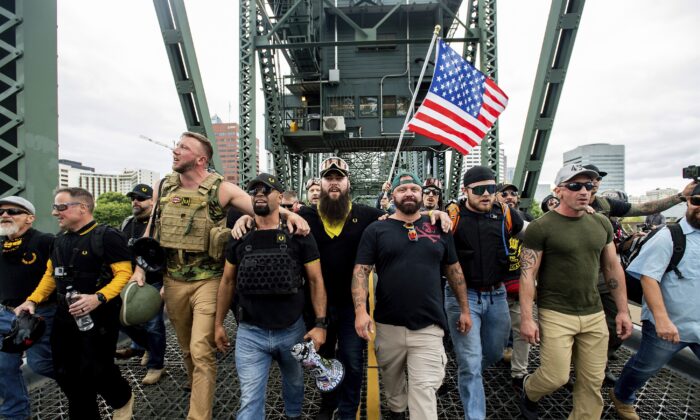 Members of the Proud Boys and Chairman Enrique Tarrio, holding a megaphone, along with other right-wing demonstrators, march across the Hawthorne Bridge during a rally in Portland, Ore., on Aug. 17, 2019. (Noah Berger/AP Photo)
US News

Oregon Gov. Kate Brown declared an emergency on Friday as state and local law enforcement prepare to try to prevent a planned demonstration and counter-demonstration in Portland from turning violent.

The Proud Boys, an all-male fraternity, is set to hold a rally in the state’s largest city on Saturday afternoon. Counter-demonstrators, including members of the anarcho-communist Antifa network, plan on holding a counter-demonstration.

The Proud Boys and Antifa have clashed in the past, including a street brawl in Portland last month. A self-described Antifa member fatally shot a supporter of another group, Patriot Prayer, in Portland on Aug. 29.

Brown, a Democrat, said in her emergency order that she believes there’s an “imminent risk of civil disturbance this weekend that threatens injury or possible loss of life.”

“The Proud Boys and Patriot Prayer groups have come to Portland time and time again from out of town looking for a fight, and the results are always tragic,” Brown said at a press conference.

“Let me be perfectly clear, we will not tolerate any kind of violence this weekend. Left, right, or center, violence is never a path toward meaningful change. Peaceful protest is the only path toward change. Those stoking the flames of violence, those coming to Portland looking for a fight will be held accountable.”

The order gave Portland police officers the ability to use tear gas to control crowds, about two weeks after Portland Mayor and Police Commissioner Ted Wheeler banned them from doing so.

Hampton promised “a massive influx” of state troopers, who he said would “be saturating” parts of North Portland.

“We will not talk specifics of our tactical plan tomorrow. Much of it, quite frankly, is still in the planning phase. But I just want to let Portland residents know that your state troopers, your Portland Police officers and Multnomah County deputy sheriffs will be out in force to keep you safe,” he said.

“And we also want to send a message that, well before the event: if your intent is to come to Oregon to bring incendiary devices, to bring narcotics, to bring firearms, unlawfully, we will do our best to take those off the streets. So if that is your intent, please don’t come.”

Hampton said in an emailed statement to The Epoch Times that Portland police officers were being deputized as part of the preparation to deal with the demonstrations.

“Portland Officers have been serving on the front lines of nightly protests for months, sustaining injuries and encountering unspeakable violence. If I am to send them into harm’s way this weekend on my authority, I’m going to ensure they have all the protections and authority of OSP Troopers. I want violent individuals thinking about about the enhanced penalties they may face if they harm a PPB Officer,” he said.

Proud Boys Chairman Enrique Tarrio told reporters in a separate press conference on Friday that his group’s priority was to have a safe event.

“And how do we do that? We communicate that with local law enforcement,” he said.

Another member said one of the goals was to get state officials to declare an emergency, deploy National Guard members to Portland, and “restore law and order” in the city.

U.S. Attorney Billy Williams said in a statement that “violent agitators” have on many nights since May attacked police officers and firefighters, damaged buildings, and repeatedly attempted to set public buildings on fire.

Williams said the gatherings on Sept. 26 would include “numerous groups with opposing ideologies … at time when our community and state continue to grapple with the ongoing COVID-19 pandemic, a major uptick in gun violence, and, now, massive wildfires burning across the state.”

The attorney warned that people who commit crimes would be prosecuted, noting that more than 80 people face federal charges for violence committed during unrest over the summer.

Portland Police Chief Chuck Lovell told reporters the goal is to keep the groups separate, something the additional law enforcement officers will help with.

Because police officers have been required to respond to near-nightly protests and riots since May, the beleaguered force was unable to intervene on Aug. 22, officials said previously.

“Everything we do is in response to the actions or someone in the crowd or someone engaging in criminal activity,” the police chief said. “So if that activity doesn’t take place, we’ll be well resourced for a safe event.”