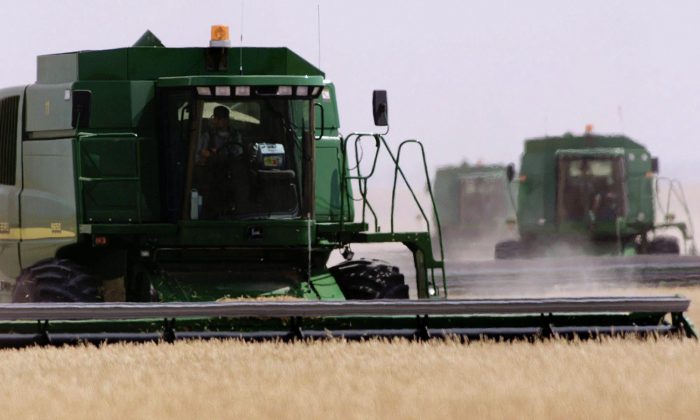 A farmer harvests his wheat field near Vulcan, Alberta. Genetically engineered wheat discovered on an Oregon farm should be a wake-up call for Ottawa because similar contamination could have crippling market effects in Canada, says a consumer group. (THE CANADIAN PRESS/Adrian Wyld)
Canada

Oregon GM Wheat Contamination Could Have Ramifications for Canada

Genetically engineered wheat discovered on an Oregon farm should be a wake-up call for Ottawa because similar contamination could have crippling market effects in Canada, says a consumer group.

Genetically engineered (often referred to as GE or GM) wheat, which is not legal anywhere in the world, was found by an Oregon farmer in his crops in April. Scientists tested the sample and the U.S. Department of Agriculture (USDA) confirmed last week that the wheat was a GM experimental strain developed and field-tested by seed giant Monsanto Co. more than a decade ago.

How the GM wheat ended up on the farm is under investigation by U.S. officials.

Lucy Sharratt, spokesperson for the Canadian Biotechnology Action Network (CBAN), says Canadians should be concerned, since GM wheat has also been field-tested in Canada.

“It’s alarming, because this has the potential for a huge market impact on farmers, and we actually right now have no idea where this contamination came from,” she says.

“It’s alarming because we predicted that something like this would happen, and yet genetically modified crops continue to be field-tested and approved.”

The USDA and Monsanto say the GM wheat does not pose a food safety concern. The market reacted nervously, however, and some importers were quick to shy away from U.S. wheat. Japan rejected nearly 25,000 tons of U.S. white wheat and countries in Asia and Europe have demanded further testing before allowing imports—making it clear that many consumers oppose GM foods.

“We are taking this situation very seriously and have launched a formal investigation,” Michael Firko, with the USDA’s Animal and Plant Health Inspection Services, said in a statement.

“Our first priority is to as quickly as possible determine the circumstances and extent of the situation and how it happened. … USDA will put all necessary resources towards this investigation.”

According to the USDA, 2005 was the last year GM wheat was tested in fields in the U.S. The last year Monsanto field-tested GM wheat in Canada was 2004.

If the contamination is found to originate from field-testing, the same dangers are present in Canada, where regulations are similar to the U.S., says Sharratt. Since wheat is one of Canada’s top exports—worth nearly $6 billion—a blow to the market would be deeply felt.

“The threat of contamination is actually an economic issue for farmers—it puts farmers in a very vulnerable situation,” she says.

Flax farmers in Canada are still recovering from GM contamination found in 2009 when a strain of flax seeds developed at the University of Saskatchewan made its way into exports—despite having been banned from the market in 2001.

Contamination was found in cereals, bakery products, baking mixes, and nut/seed products, which made it into 35 countries before Canadian flax exports were all but shut down.

Sharratt says this is an example of how little is known about how GM strains spread.

“Even when the Canadian government was allowing field tests of GM wheat they didn’t really know how to manage the contamination risk,” she says.

Given the Oregon contamination, the Canadian government should not allow field trials of GM wheat until they figure out how to contain risks, adds Sharatt.

In the long term, Ottawa needs to research and reassess their entire approach to GM foods, and stop the entry of market-sensitive GM crops. GM alfalfa, for example, is currently in its final stages of approval and could be legal to sell in Eastern Canada as early as this summer, despite opposition from some farmers.

Agriculture and Agri-Food Canada did not respond to comment requests in time for press deadlines.

Monsanto is conducting its own investigation, and says the Oregon contamination is an isolated incident. The company confirmed, however, that no prior field-testing was ever done at the location where the GM wheat was found.

“We are interested in getting to the bottom of this reported detection in a single field in Oregon,” Philip Miller, VP of regulatory affairs for Monsanto, said in a statement.

“We’re prepared to provide any technical help that we can as this unusual and currently unexplained report raises important questions about the circumstance and source of the presence.”

On Tuesday, a Kansas farmer filed a civil lawsuit against Monsanto over the GM wheat discovery in Oregon, claiming the company’s “gross negligence” hurt local growers by driving down wheat prices and causing some international markets to halt imports. Similar lawsuits are likely to follow, say some analysts.

The U.S.’s $9 billion wheat export market is now holding its breath until officials confirm whether the contamination has spread to more crops, and how it ended up on the Oregon farm in the first place.