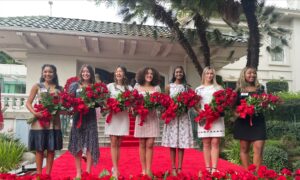 Members of the Lambda Chi Alpha fraternity at the University of Oregon allegedly trashed the Shasta Trinity National Forest on the weekend of May 21 while partying.

A spokesperson for the California forest, Phyllis Swanson, says about 1,000 people were in the area of Slaughterhouse Island in Lake Shasta, along with 60 houseboats and some patio boats, according to the Willamette Week.

Swanson said the “tremendous amount of garbage and personal belongings that were just abandoned” had the greek letters from the fraternity and the University of Oregon labeled on some items.

Photos of the trash were posted on social media showing tents, coolers, bags, flip-flops, cases of beers, and black garbage bags scattered across the park.

Swanson said partying at Lake Shasta is a ritual for students from many institutions—as well as leaving behind trash, “but nothing ever to this extent,”

About 90 to 100 tents were abandoned on the island, along with sleeping bags, air mattresses, personal belongings, food, and “of course, alcohol.”

“My personal guess is they have no respect for mankind, but professionally, I don’t know,” said Rob Sandbloom, from the Shasta County Sheriff’s Department.

“This type of event puts a great amount of stress on us,” she said.

“We’re low on resources and now we have to pull people from other programs to help with the clean-up,” added Swanson.

As of now, 10 yards of trash has been collected.

The University of Oregon released a statement calling the situation “disgraceful.”

“The university is actively investigating the situation and will take action as appropriate. We are working with authorities to learn all we can and determine who is responsible,” said the statement.

The fraternity, whose members are accused of trashing the forest, also released a statement on Facebook and said the acts were “unacceptable.” The chapter said it has reached out to the United States Forest Service to arrange for the fraternity’s members to help with the clean-up.

“On behalf of any of our members involved, the UO Zeta Omicron Zeta Chapter would like to extend our deepest apologies for any destruction of Lake Shasta resort and the surrounding environment,” said the statement.

“Also, on behalf of any of our members involved, we apologize to the entire Fraternity and Sorority Life Community at the UO and our university. The actions in which these individuals participated do not reflect our Fraternity’s values, nor do they reflect the values of our community here at the UO,” added the fraternity.