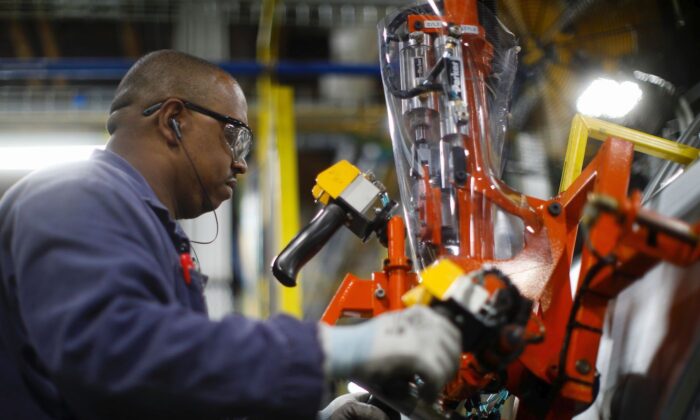 A 2019 file image of a worker at a newly renovated Ford's Assembly Plant in Chicago. (Jim Young/AFP via Getty Images)
Economy

New orders for U.S.-manufactured goods in November increased by about 1.6 percent to $532 billion, maintaining the streak which has been positive for the last 18 out of 19 months, although there was a decline in mining and oil field machinery, along with turbines, generators and other power transmission equipment.

The latest numbers followed an increase of $6.4 billion in October or 1.2 percent from the previous month, according to a report published Thursday by the Census Bureau. The year-to-date change from 2020 indicated a 17.1 percent increase of $807 billion to a total of $5.5 trillion in 2021, while the value of total manufacturers’ shipments, new orders, unfilled orders, and total inventories went up by 12.9 percent.

Manufacturing accounts for 11.9 percent of the U.S. economy and supports approximately 12,546,000 jobs in the country. It had been on a steady downward slide since late 2000, when it was averaging around 17 million workers, but gradually started to recover in 2010 until the pandemic hit.

New orders in “primary metals” and “fabricated metal products” categories went up slightly with an increase of 0.2 and 0.7 percent respectively. Machinery fell 0.9 percent with a decrease of $330 million to end the month with a $38 billion output.

Computers and electronic products registered a marked increase of 4 percent with a growth of over $1 billion, recording $26 billion in November orders and a yearly hike of 7.2 percent. Industrial machinery went down 2.3 percent for the month but had the highest yearly increase of over 62 percent.

Orders for new household appliances, furniture, and electrical equipment contracted approximately between one and two percent. Transportation equipment went up 6.5 percent for the month to record over $82 billion in new orders, while increasing more than 35 percent for the year. Iron and steel mills registered a robust yearly growth of around 30 percent.

Although there is strong demand in the markets, the manufacturing sector is struggling to keep pace due to shortages in raw materials and labor. Work backlogs continue to accumulate as supply chain constraints hinder the timely delivery of materials.

Meanwhile, Omicron-related staffing issues and vaccine mandates are preventing manufacturers from working to full capacity and fulfilling pending orders. The November report does not include Omicron-related disruptions as the highly-transmissible variant was discovered by the end of the month.

There were almost $1.26 billion unfulfilled orders, an increase of 0.7 percent from October. Unfilled orders have been up for ten consecutive months. Manufacturers’ inventories went up 0.7 percent to $770 billion with a 4 percent hike in construction machinery.

The ratio of manufacturers’ inventories to shipments and unfilled orders maintained a steady 1.46 percent increase, the same as from September to October.