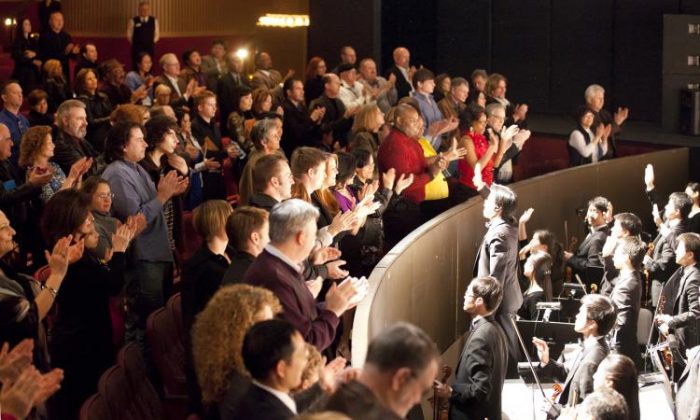 Shen Yun performers and the orchestra receive a standing ovation, at a performance in early 2011. (Edward Dai/The Epoch Times)
News

SAN FRANCISCO—Orchestra owner and veteran music professional Mrs. Wang has seen many performances in her life, but was amazed by the sold-out Shen Yun Performing Arts performance at the San Francisco’s prestigious War Memorial Opera House on Jan. 8. “I tell you, this is very different music,” she said.

Based in New York, Shen Yun Performing Arts is the world’s premier Chinese classical dance company, is reviving 5,000 years of traditional Chinese culture on stage—complete with a live orchestra. Mrs. Wang talked about how Shen Yun blends elements from the Western with the Chinese musical traditions. “Usually when you go to a concert you [hear] Chinese music only or Western music only. [It is] very hard for them to blend together,” she said.

The Shen Yun Orchestra consists of classical Western as well as harmoniously integrated traditional Chinese instruments including the suona, the pipa, the erhu, and the dizi.

The Shen Yun website characterizes the suona, a double reed woodwind instrument as one of the “most unique, playful, and distinctively Chinese-sounding” instruments. The pipa, the Chinese flute, is called “the ‘king’ of Chinese folk instruments,” while the erhu is described as “capable of conveying a wide range of emotions,” even though it only has two strings. The dizi or bamboo flute is one of the “most popular instruments in traditional Chinese music.”

While listening to performances by other groups, Mrs. Wang said she could not “tell what kind of instruments were playing.” Of the Shen Yun Orchestra, she said, “I was so amazed that the suona and the pipa, erhu, dizi, that they can work so well.”

At one point during the performance, she recalls amazement. “I was listening to the pipa and the dizi with the violin,” she said. But then she thought, “Wait a second—that was so Chinese. This was because this was a pentatonic music!”

The realization captured her imagination: “Oh my God, that was so beautiful. I couldn’t even imagine they you could put them together and so well, so [much] harmony, it’s beautiful, beautiful!”

Then Mrs. Wang expressed her amazement, not only at the music, but also at the musicians.

“And also, of course the Chinese flute [player], the suona, the pipa, you could tell, they are all professional, they were trained professionals, very good,” she continued. “So this is a very outstanding orchestra.”

Asked how she could distinguish the first-chair violinist from the other violin players, she said, “Because I am professional musician [laughs]. That guy is very, very, very good. … You can hear the quality he plays, the musical expression, the dynamic, the way he performs, the way he plays. I heard his music. Outstanding.”

Each year Shen Yun amazes millions of new theater-goers, as well as long-term fans, with an all-new program. Three groups—each consisting of about a hundred dancers, musicians, operatic singers, and staff—simultaneously tour major cities in America, Asia, Australia, and Europe from December to May. Mrs. Ying Chen is the conductor of the Shen Yun Performing Arts New York Company orchestra that has just completed seven performances in six days in San Francisco and will next perform in Los Angeles.

Mrs. Wang, who likes to keep a low profile and calls herself a Chinese instrument player, is a professional in the Western as well as in the Chinese tradition. She said of Mrs. Ying Chen, “She is very good … she wasn’t only conducting. She was watching the play, the dance. And co-ordinating—she did that so well.”

While the Shen Yun Orchestra is remarkable in its own right, it is even more remarkable as an accompanying part of the Shen Yun dance company. Mrs. Wang noted, “Usually you don’t expect a dancing program has such good music, live music. Usually they are not this good.”

She said she enjoys live performances often. “You can tell the quality, you know. The music won’t be as good,” she said. But considering the Shen Yun Orchestra, “This one is just totally different; very, very good,” she said.

Mrs. Wang continued: “And you can tell, those dancers, they are professionally trained, and they work very hard. If they didn’t work very hard, there’s no way they could dance so well. You know, they can—like flying!”

Mrs. Wang further noted that there is much more to the Shen Yun performances than many other dance shows: “This one [is] not only dancing, it comes with a story. They tell you the history, the Chinese culture … So it’s more than just a dance. You see, and when you look at it, there is also a philosophy there, too,” she said. “Among the music, the culture, the dance, everything, all mixed together—it’s really done well.”

One Shen Yun piece struck Mrs. Wang in particular, “Crazy Ji Saves the Day.” It tells of the 12th-century Chinese monk Ji Gong, affectionately known as ‘Crazy Ji,’ who “helped others in the most surprising of ways,” according to the program book. “When they have Ji Gong—[you can see] a live philosophy,” she said.

Besides presenting classical Chinese dance and stories from 5,000 years of Chinese civilization, Shen Yun brings to the stage ethnic and folk dance, at a highly artistic level.

According to the Shen Yun website, “China has 55 officially recognized ethnic minorities, and their distinct ways of life reflect discrepancies in local topography, climate, and religious tradition. It is no surprise that these factors are also deeply embedded into each ethnicity’s dance style.”

Mrs. Wang noted the dance pieces “In the Mountains” (which showcases Taiwanese Amei dance) and “The Dance of the Qiang People.”

Reporter’s note: Mrs. Wang is a pseudonym. The interviewee likes to keep a low profile.