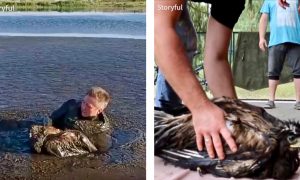 It is well known now that the orangutan population is rapidly being destroyed by the large-scale deforestation which is tearing down their natural habitat. Simultaneously, the market for exotic pets is growing exponentially, making the poor creatures doomed to be exploited and tortured in unsuitable conditions for the remainder of their lives. Such was the case for one poor orangutan, who was rescued from life as a pet monkey where he was fed nothing but sickly-sweet condensed milk.

Now, however, the work by dedicated rescue teams and vets has allowed poor little Budi to grow into a strong and healthy young orangutan who spends his days swinging through the trees—as he should be! Watch his transformation from an unloved young baby to the confident young adult orangutan that he is today in this truly meaningful video which will help you to appreciate the orangutan in all of its glory!