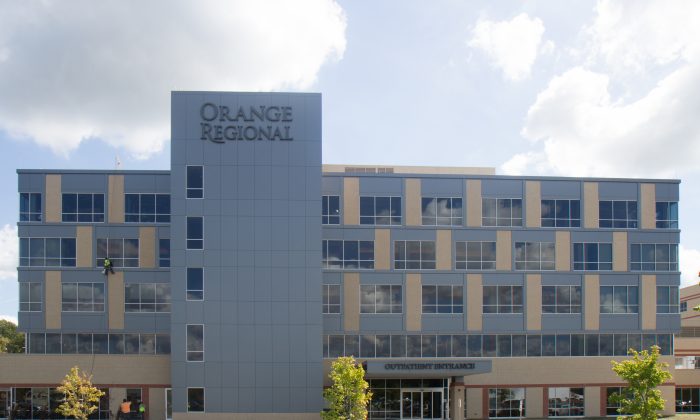 The outpatient building at Orange Regional Medical Center in Wallkill on Sept. 16, 2016. The recently-completed building is set to open to the public Sept. 26, 2016. (Holly Kellum/Epoch Times)
New York

TOWN OF WALLKILL—Chairs were still being unwrapped from their plastic coverings, art being hung on the walls, and appliances being installed at Orange Regional Medical Center’s (ORMC) new cancer center and outpatient building on Sept. 16, ten days before the buildings were set to open to the public.

The new buildings, which broke ground last June, have either moved services from the Orange Regional Medical Pavilion in Wallkill and the Goshen Patient Service in Goshen, or are new to ORMC.

Only the Center for Sleep Medicine and Wound Healing Center are left at Orange Regional Medical Pavilion.

“There certainly is a need for advanced healthcare in our area,” said Rob Lee, the executive director for marketing and public relations for the Greater Hudson Valley Health System. “The idea is to provide it in a central location so people don’t have to travel out of the area.”

The single-story cancer center and the five-story outpatient building are adding 26,000 and 53,000 square feet of space respectively to ORMC’s 73-acre site at 707 E. Main St., and are set to open to the public Sept. 26.

The new outpatient cancer center, called the Spagnoli Family Cancer Center after the Spagnoli family who donated to it, is equipped with two linear accelerators, an infusion center, a medical library, exam and consultation rooms, and a “healing boutique,” with things like hats, scarves, lotions, and soaps.

The infusion center, which has stayed in the same place but been renovated, is what ORMC called the Spagnoli Family Cancer Center before. In addition to being renovated, it also has a new garden outside its west-facing windows for patients to look at while they get their treatment. The garden features plants that attract hummingbirds and bronze statues of children playing .

“[Patients] can spend a day [in there], and it’s not always pleasant,” said Lauren Kropf-Zuckerman, a media liaison for the hospital, explaining why they decided to create the garden.

Just north but connected to the cancer center is the outpatient services building, the top two floors of which are unfinished.

“As we hire more physicians [for the Orange Regional Medical Group], we’ll expand into those floors,” Lee said.

On the first floor is the breast center and lab, outpatient surgery rooms, and primary and urgent care. It has a baby grand piano, and once it opens will have a café, called the Orange Eatery, and a retail pharmacy open to the public.

The third floor is entirely for physicians in the Orange Regional Medical Group, which is a mix of primary care doctors and specialists, Lee said.

The buildings have some geeky features, like motion-detecting lights, remote-controlled blinds, touchscreen check-in stations whose screens are sanitized by UV lights, and a Varian TrueBeam linear accelerator which Lee said has “pinpoint accuracy” to remove tumors with minimal damage to surrounding tissue.

They compliment the shiny new floors, the electric fireplaces, brightly-colored walls and furnishings that match the locally-made art on the walls. Commissioned from several Hudson Valley artists, the art emphasizes nature and harmonizes with the color schemes of the furniture and walls.

“You don’t have at your home in your bedroom just a stark room—you have art, you have soft things—and so when you come to the hospital … that’s just part of the healing process,” Lee said about the décor.

The buildings, designed by Forum Studio headquartered in St. Louis, Missouri, and built by Skanska USA from Sweden, came in on schedule and within the $99 million budget, Lee said. A lot of that is due to the unusually warm winter, he said.

Funding for the additions came from a mix of unused bond proceeds from construction of the main hospital, which opened in 2011, $70 million in tax-exempt bonds from the New York State Dormitory Authority, $3.3 million in donations ($2.8 million of which has been collected), and the rest from the hospital itself.

When asked why the hospital was focusing on cancer, Lee said only that it is a disease that “everyone faces, whether it’s personal or a family member.”

Whether related or not, county data shows that Orange County has a higher-than-average cancer rate, both compared to the state and the rest of the country—from 2008 to 2011, it was the second leading cause of death in the county behind heart disease.

The mortality rate for cervical cancer was similar: 3.4 in Orange County compared to 2.2 for the state, and 2.4 for the nation.

While Lee said their aim is to “keep people healthy” so they don’t need treatment in the first place, he said they are trying to be a one-stop shop for cancer patients from diagnosis to treatment to recovery.

He pointed to a slew of cancer therapies that ranged from the conventional infusion and radiation therapies to more alternative ones like acupuncture, yoga, pet therapy, and aromatherapy.

“With this expansion, it’s really going to be a healthcare destination for people,” Lee said.