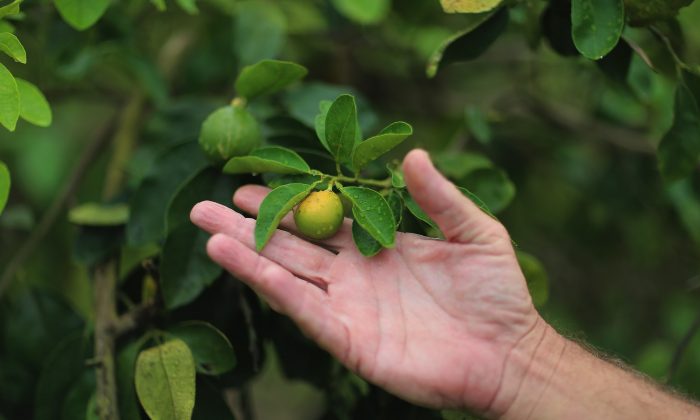 Guy Davies, an inspector of the Florida Division of Plant Industry, shows an orange that is showing signs of 'citrus greening' that is caused by the Asian citrus psyllid that carries the bacterium causing disease, 'citrus greening' or huanglongbing, from tree to tree in Fort Pierce, Fla., on May 13, 2013. (Joe Raedle/Getty Images)
Business & Economy

Prices for orange juice are surging amid a nationwide shortage of oranges; it is likely that the United States will see its worst domestic orange harvest season since World War II, according to new predictions from the Department of Agriculture.

The shortage is attributable to a low yield in Florida, which is responsible for the majority of orange crops in the United States. This year, Florida is expected to produce 44.5 million standard 90-pound boxes of oranges—three percent lower than the yields predicted in December.

In addition to the ongoing supply chain disruptions and labor shortages which have caused scarcity of many familiar resources, this year’s dismal orange harvest is attributable to a plague of citrus greening, a disease spread by insects that makes orange crops inedible.

While crop plagues are nothing new, the situation in Florida may be due to a lack of genetic diversity in the state’s orange crops. Though orange farmers and scientists have attempted to engineer new breeds to withstand contamination, they find themselves in a race against time, with citrus greening becoming more prevalent in recent years.

This year’s measly orange harvest is not the first incident where genetic disease has dispossessed consumers of familiar fruits. In the former half of the 20th century, the most popular variety of banana was the Gros-Michel, a smaller and sweeter breed than the bananas familiar today. However, in the 1950s, the Gros-Michel was devastated by Panama Disease, a fungal infection that annihilated banana crops worldwide.

The devastation of the Gros-Michel gave rise to the Cavendish banana breed, which accounts for about 95 percent of all bananas sold in the United States. However, the Cavendish variety is incapable of sexual reproduction and can only multiply through cloning, leading to a distinct lack of genetic diversity among current banana crops. This genetic homogeneity makes the crop susceptible to disease, and this vulnerability may result in the Cavendish banana meeting the same fate as the Gros-Michel.

This season’s outbreak may be a foreboding sign for the future of orange crops in the United States. Citrus greening first arrived at American orchards in 2005, and has become increasingly prevalent since then, jeopardizing the Florida orange industry. While this year’s shortage will likely be ameliorated by surplus crops from abroad, the future of domestic orange farming remains uncertain as poor genetic diversity and bacterial infection threaten to undermine the entire industry.