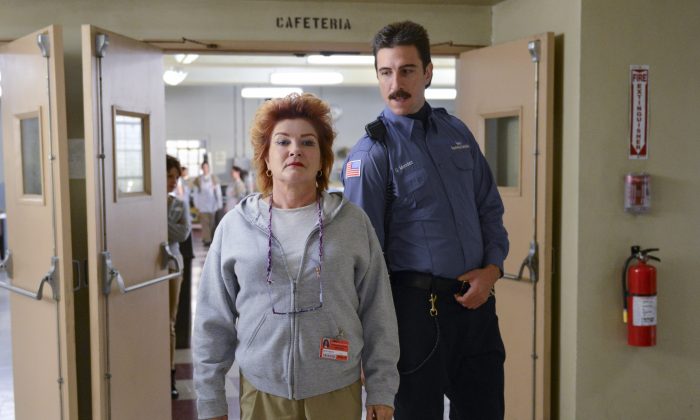 This image released by Netflix shows Kate Mulgrew, left, and Pablo Schreiber in a scene from “Orange is the New Black.” The second season of the prison series will be available on Friday, June 6, on Netflix. (AP Photo/Netflix, Ali Goldstein)
Entertainment

Orange is the New Black Season 3 won’t have fan favorite “Pornstache,” it has been announced.

According to E! Online, Pablo Schreiber–who plays the prison guard–said he won’t appear in the series next season, saying it’s because he’s also on a show called “The Brink.”

“I’m not taking part in the third season,” he said. “I’m a member of a show called The Brink that’s going to be on HBO. It’s a half-hour comedy with Jack Black and Tim Robbins and me [as] the three leads. I’m really excited about it.”

He didn’t rule out coming back for Season 4 if there is one.

“I respect [creator Jenji Kohan] to no end. I think she writes the best dialogue on TV right now. While season three is out of the picture, beyond that is open,” he said.

He also wrote on Twitter: “For all the over-reactors: Just bc P-Stache won’t be on Season 3, doesnt mean we won’t see him again.”

Filming for Season 3 is currently underway.

Matt McGorry, who plays Bennett, also talked about his role on Orange is the New Black and ABC’s How to Get Away with Murder.

“Generally speaking, I get to be present in both shows, which is sort of amazing,” he said, according to E! “I am allowed to do both, which is incredible and I think ABC giving me permission to do that is really quite wonderful…It’s too early to tell how it’s going to work, but same way as Pablo Schreiber in season two, you can shoot things out of order. Thankfully, I get to do both.”

The news comes as one sheriff in Michigan said the show has made orange jumpsuits too trendy, saying his jail will now feature uniforms with black and white strips.

“Some people think it’s cool to look like an inmate of the Saginaw County Jail with wearing all orange jumpsuits out at the mall or in public,” Saginaw County Sheriff William Federspiel said, according to Time magazine. “We do have our inmates out sometimes doing work in the public, and I don’t want anyone to confuse them or have them walk away.”