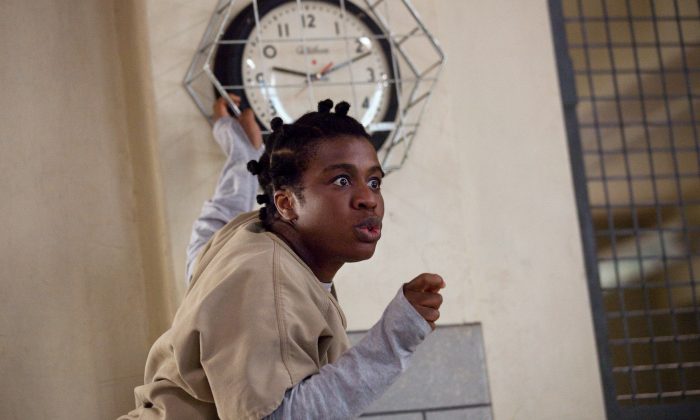 This image released by Netflix shows Uzo Aduba in a scene from “Orange is the New Black.” The second season of the prison series will be available on Friday, June 6, on Netflix. (AP Photo/Netflix, Jessica Miglio)
Entertainment

Orange is the New Black Season 3: Filming Has Already Begun for Netflix Show’s Next Season

The “Orange is the New Black” cast and crew already filming Season 3, says a report this week.

According to BuzzFeed, “the trailers are all lined up” and it included a photo of them. BuzzFeed also interviewed show actress Uzo Aduba, who plays “Crazy Eyes,” in the Netflix show.

She said she wouldn’t change her Nigerian name as an actress.

“When I started as an actor? No, and I’ll tell you why. I had already gone through that. My family is from Nigeria, and my full name is Uzoamaka, which means ‘The road is good,'” she told the website.

She said, “Quick lesson: My tribe is Igbo, and you name your kid something that tells your history and hopefully predicts your future. So anyway, in grade school, because my last name started with an A, I was the first in roll call, and nobody ever knew how to pronounce it.”

And according to MTV, the cast members also talked about what they want from Season 3.

“I just want her to be able to find her happiness and her place without having to look for it from some outside source. I want her to find her own voice and her own love, and really stand in that,” Abuda said.

And Taryn Manning, who plays Pennsatucky, she wants a “sing-along.”

“Wouldn’t it be great to see Pennsatucky lead a sing-along? I would pay money for that. No one would [follow her], but I think it would be funny to see her try to start one. It would have to be something so left field… something not biblical, but she thinks it is,” she said.