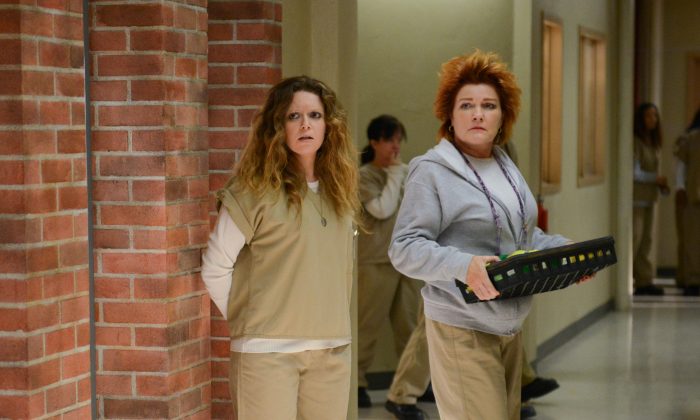 This image released by Netflix shows Natasha Lyonne, left, and Kate Mulgrew in a scene from “Orange is the New Black.” (AP Photo/Netflix, Ali Goldstein)
Entertainment

An article saying Orange is the New Black was canceled is nothing more than a hoax.

Season 3 is currently filming and will premiere on Netflix next year.

The fake article, published on “satirical” news site Empire News, had tens of thousands of “likes” and shares on Facebook, and it had numerous tweets.

“In a bizarre turn of events, and just months after renewing the series for a third season, Netflix co-founder and CEO Reed Hastings has announced that the critcally-acclaimed series Orange is the New Black has been cancelled,” it says. It adds: “The news is a shock to fans of the show, which is based on true events described in Piper Kerman’s memoir, Orange Is the New Black: My Year in a Women’s Prison, about her experiences in prison. The show was originally renewed for a third season in early June.”

According to a disclaimer, Empire News produces only fake news.

While a number of people thought the bogus article was real, many did not.

“Y’all are crazy. If people took the time to check sources, or hell, just GOOGLE something…you can tell this is a satire article. Some of you feminazis REALLY give TRUE feminism a BAD NAME. It’s not about hating men, it’s not about always looking for a fight. Take a damn chill pill. Sheesh,” one person wrote on Facebook.

Another said, “Massive traffic and exposure. Give your writer and social media manager a raise! Well trolled Empire, well trolled.”