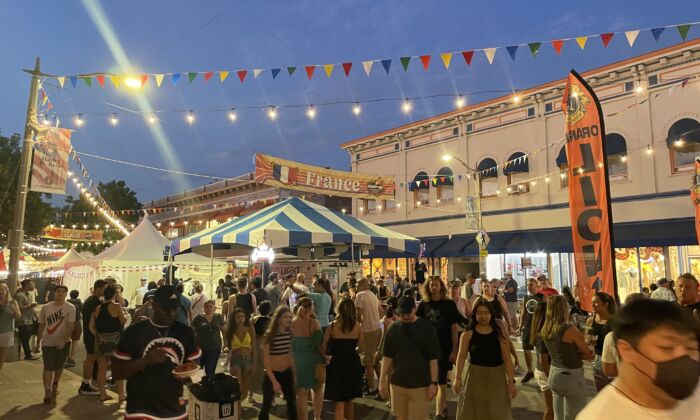 Upon entering the fair on Glassell Street, large crowds of visitors were greeted with a litany of global cuisine, among which were sausages from Germany, tamales and tacos from Mexico, and fish n’ chips from England.

The street corner also featured entertainment from local DJ Oscar Aguilar later that evening, including Bachata and other Hispanic favorites, which guests flooded his stage to sing and dance to. The dance floor got so packed, that many had to stand on the adjacent sidewalk to enjoy the show.

Over in Plaza Park, the center of the festival, vendors, local groups, and political figures set up their tents to greet guests and promote their ideas and crafts.

Among them was the Rotary Club booth, under which sat leaders from the local Brea, Lakewood, and Fullerton chapters, among others. The nonprofit is known for its vast humanitarian work across the world, having raised hundreds of millions of dollars for causes such as eradicating polio, of which the group has helped raise over $200 million, according to Rotary District Governor Dan Ouweleen.

Bellomo, who has been a painter for over 30 years, was “excited” to set up her tent at the street fair for the chance to interact with other locals.

“It’s my favorite part of running this business, getting to meet new people and build relationships,” Bellomo told The Epoch Times.

Her tent’s free-handed artwork features pastel-colored flowers and plants, uplifting quotes and bible verses, and even holiday-themed paintings all for sale.

Just a few vendors down, local artisan Jared Watson hosted his mother’s art stand for their company known as Simply Sawdust. Like Bellomo, Watson’s favorite aspect of the business has been setting up at places like the International Street Fair in order to meet his mother’s patrons and fans in person.

“I like getting to meet [potential customers] face-to-face, it’s more fun than when you’re just selling online,” Watson said.

His mother’s vibrantly painted Disney-themed woodwork is on sale through Sunday, including infamous wood etchings featuring references from Disney’s Halloween classic, Hocus Pocus, among many others.

Parked across Watson’s tent, however, is Dermfx’s mobile med spa, where patrons are able to receive botox treatments in the black RV bus right on the fairgrounds.

Catering mostly to Orange County clients in its day-to-day operations, the spa offered free consultations to guests looking for cosmetic procedures. Inside, nurse practitioners spoke with potential clients as they got seated in the spa’s pink leather chairs adorned with bright pink pillows.

The fair, which runs until Sunday, Sept. 4, is a staple for the city’s Labor-Day weekend celebrations and expects to receive thousands more visitors.