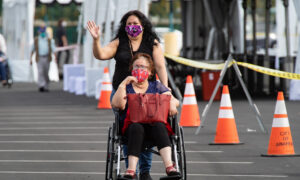 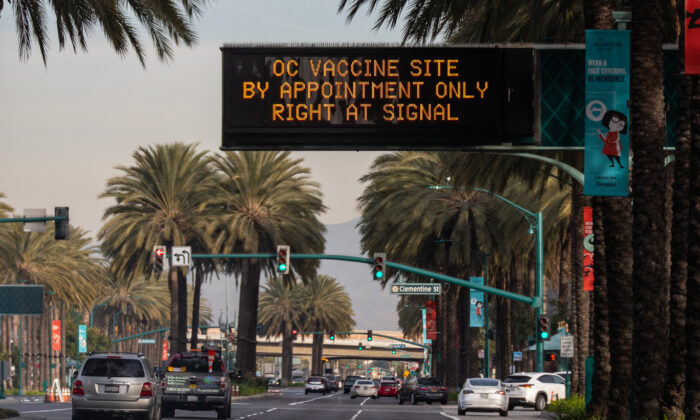 A sign communicates the arrival of a coronavirus vaccination center set up in a parking area of Disneyland themepark in Anaheim, Calif., on Jan, 13, 2021. (John Fredricks/The Epoch Times)
Southern California

Hospitalizations continued a downward trend, dropping from 591 Feb. 20 to 577 Feb. 21, with the number of coronavirus patients in intensive care dropping from 196 to 190, according to the Orange County Health Care Agency.

The death reports are staggered because they come from a variety of sources and are not always logged immediately.

Officials were still waiting for word on restocking vaccines as winter storms in the East have blocked delivery of doses.

Winter storms in the east, which have delayed delivery of COVID-19 vaccines nationwide, have forced the closure of Orange County’s Disneyland super point of distribution (POD) site until at least Feb. 22.

The weather-caused supply shortage also may delay the scheduled Feb. 24 opening of another new distribution point at the Anaheim Convention Center.

“We didn’t get any [more] vaccine yet, so we’re on a holding pattern with the temporary closures of at least the Disney POD,” Orange County chief executive Frank Kim said. “And there’s no change to the current timeline for Santa Ana College and Soka University.”

County officials on Feb. 19 used what little vaccines they had left to provide booster shots for seniors through mobile clinics that were set up to reach seniors who had to get help enrolling in the county’s Othena app and website, Kim said. It would be easier to reschedule shots for residents who were able to navigate the technology to make their own appointments, Kim said.

Anyone due a booster shot shouldn’t worry about being a little late, he said. The manufacturers say a booster shot can be dispensed up to six weeks late and still be effective, according to Dr. Clayton Chau, the county’s chief health officer and director of the Orange County Health Care Agency.

Starting next week, the county will allocate 70 percent of its vaccines for residents 65 and older and the rest for new categories of workers now made eligible for shots by the state. They include teachers, child care providers, and food industry workers.

“This change to eligibility guidelines will mean a slower vaccine rollout for individuals who are currently eligible under Phase 1a and people age 65 and older,” Chau said in a memo to county officials on Feb. 19.

From about Feb. 23 through March 2, only booster shots will be available at Disneyland, Soka, and the Anaheim Convention Center, Chau said. The teachers, child care providers, and food workers can get shots at Santa Ana College or on school campuses in a program to be coordinated by the Orange County Department of Education.

If the new Johnson & Johnson vaccine is authorized as expected on Feb. 26, then that will help county officials ramp up vaccine distribution, Chau said.