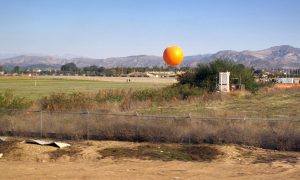 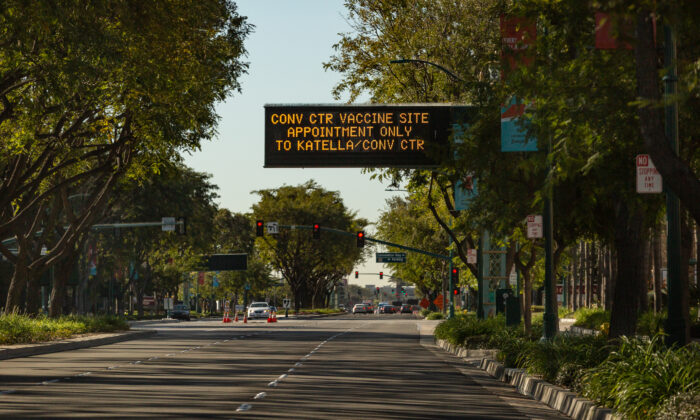 Orange County’s inoculation efforts appeared to be back on track this week with the arrival of additional vaccines, the opening of its third large-scale vaccination site, and confirmation that its Disney site would reopen.

The region’s third super point of distribution (POD) opened on Feb. 23 at the Anaheim Convention Center and will distribute the Moderna vaccine. It’s the second hub for Anaheim, which in January launched its first mass-scale immunization center at Disneyland.

Orange County’s immunization plans suffered a setback last week after a winter storm delayed an incoming shipment of vaccines to California. Without it, health officials were forced to close some vaccination centers, including Disneyland.

The county’s top doctor told the Orange County Board of Supervisors on Feb. 23 that the backlogged shipment had arrived, allowing for the reopening of the Disneyland site on Feb. 24.

Orange County is expecting an additional 30,000 Moderna doses and 19,000 Pfizer doses this week.

At Soka University—a second super POD that serves much of South Orange County—supplies continue to be limited.

“We are still very low on vaccine due to East Coast storms that disrupted the supply chain,” Mission Viejo Mayor Trish Kelley told The Epoch Times via email. “Hopefully we can get back to large-scale distribution by the end of the week.”

Mission Viejo emergency services manager Paul Catsimanes said about 1,500 doses of vaccine were distributed on Feb. 22, compared to more than 3,000 daily doses given during peak activity.

“They are still open, but it’s a much smaller amount,” Catsimanes told The Epoch Times.

Mission Viejo is mostly supporting the Soka University Super POD in Aliso Viejo via staffing and planning, “because that’s the quickest way to get the vaccine out to the masses,” he said.

“Super PODs provide approximately 30 percent of the vaccines, with the others coming from hospitals, Walgreens, pharmacies, doctors’ offices, [and more].”

The City of Mission Viejo is considering its own super POD with vaccines allocated from Orange County. The city has a standing offer to partner with Saddleback College and assists in managing a super POD site at the Norman P. Murray Center.

Mission Viejo’s mayor said the city has reached out to Supervisor Lisa Bartlett to extend the offer to the county.

“Our city staff provides flu shot clinics each year at the Murray Center, so the staff is experienced and trained, and our facility has ample parking and space for providing such clinics,” Kelley said.

“In addition, Mission Viejo is home to two senior communities, Casta del Sol and Palmia.  Both of these communities have expressed interest in hosting a clinic. This would be especially convenient to residents in those communities.”

If created, the Casta del Sol and Palmia PODs would be temporary, lasting sometimes for a single day, and on a smaller scale than the existing Super POD sites.

“A local POD would be very effective because it would bring the vaccine to the people, which would be especially helpful to our seniors and those who may have trouble getting to one of the Super POD sites,” Kelley said.

“At this point, the issues lie with the shortage of vaccines, not availability of POD sites. It would be possible to add more POD sites and set up mobile POD sites if more vaccines were available.”