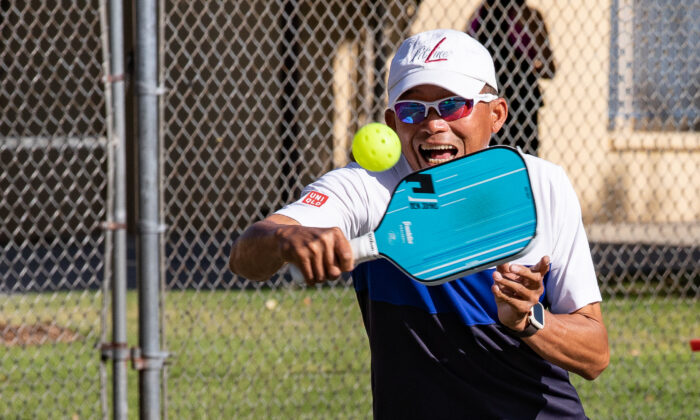 ORANGE, Calif.—Pickleball enthusiasts gathered April 21 with Rep. Lou Correa (D-Calif.) and the Orange City Council in presenting $2 million in funding for a pickleball and fitness circuit at Hart Park.

Known for being one of the fastest growing sports in America, pickleball combines the movements of tennis, ping pong, and badminton.

“This project here was brought up by the City of Orange—your representatives who said this is what we want to say in the projects in terms of funding,” Correa told the crowd. “This is the way democracy is supposed to work in you bring us issues and concerns, and we respond [locally] to a lot better than bureaucrats among the White House saying this is what Orange needs.

“These are the folks who represent you, and by the way, this is your money. This is taxpayer money.”

In what used to be a tennis court, four temporary pickleball nets were set up for players seeking to play the game until construction commenced for the future pickleball courts.

With the month of April marked as National Pickleball Month, timing seemed fitting for the announcement of the new courts.

“Members of the community have been asking for this exciting expansion,” Marysol Ibarra, the communications director for Rep. Correa, told The Epoch Times. “Because of the high density and low income of this community, families need more access to outdoor activities.”

Ages of players ranged from children to seniors who used their wooden pickleball rackets to swing the plastic balls over the net to challenging opponents.

Advanced players confident in their movements were met with the sound of a quick and high pitch collision as their rackets made contact with the ball.

“To me the atmosphere is more camaraderie with laughing and joking on the court,” pickleball player Corey Puck told The Epoch Times. “Tennis tends to be kind of cutthroat, but this game is more like ‘just relax and have a good time.'”

Across the Hart Park tennis court, Puck swung away with his game partner Edith Jimenez, who started playing the sport in March.

“I was invited to play the game and I loved it,” Jimenez told The Epoch Times. “And then I decided I wanted to get better at it so I can play in teams.”

Where the pandemic put a halt to many businesses and activities, Orange County’s popularity for pickleball has increased with over 30 new courts and counting.

Those interested in learning more about the sport of Pickleball can visit https://usapickleball.org/ for more information, as well as court locations and scheduling for league tournaments.