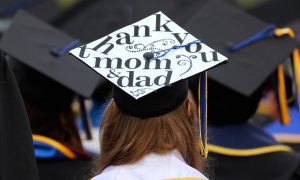 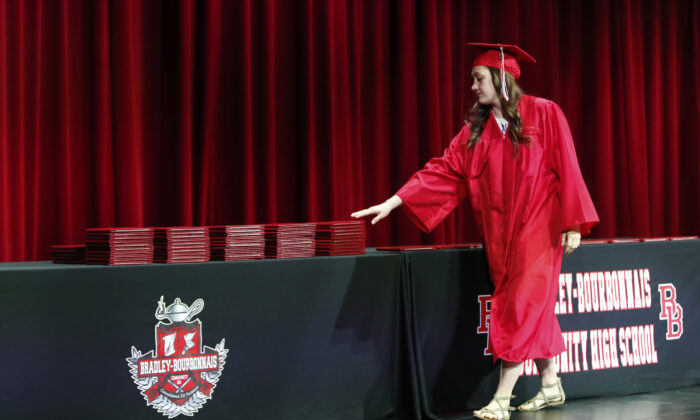 A student picks up her diploma during a graduation ceremony at Bradley-Bourbonnais Community High School on May 6, 2020, in Bradley, Ill. The high school diploma is frequently seen as the doorway to other opportunities, including college and a job. (KAMIL KRZACZYNSKI/AFP via Getty Images)
Southern California

California State University–Fullerton (CSUF) and University of California–Irvine have announced that they’ll be holding limited in-person commencements for the classes of 2020 and 2021.

The announcement for CSUF came in an email from provost Carolyn Thomas, who told students and faculty on March 22 that the June ceremonies would be limited to graduates only, meaning friends and family could only watch their student cross the stage via live-stream.

“We know that crossing the stage is an important part of commencement, so we are excited to invite back to campus graduates for an in-person, graduate-only walk across the commencement stage,” Thomas said.

The university allowed the change after the state issued new advisories for public ceremonies, allowing outdoor events related to graduations.

Exact dates for different CSUF majors will be announced in April; ceremonies will begin June 12, beginning with the class of 2020.

Prior to holding the in-person ceremonies, the university will be holding a virtual all-university commencement June 11, where graduating students will be invited to watch speeches from campus leadership and the conferring of degrees. Afterward, each college within CSUF will hold virtual, program-specific cerebrations.

Thomas noted that if public health conditions worsen, it’s possible the commencement could be modified or canceled.

“As we have experienced during the past year, the pandemic is still a very fluid situation, and all plans are subject to change based on restrictions and guidance from the state of California,” she said.

UC–Irvine will hold a graduate-only ceremony for students, similar to that of CSUF.

The university will allow graduates to cross the stage and have a photo opportunity, but no guests will be allowed to accompany students. The event will be live-streamed for guests to watch. No date has been announced yet.

Prior to its stage-only commencement, UC–Irvine will hold a virtual campus-wide commencement June 12 featuring speeches from university officials.

Meanwhile, Saddleback College will be offering a drive-thru option for students looking for an in-person experience.

“Students will be able to come to campus and get their photos taken and see their professors, but it won’t be a ceremony like we would do in a typical year,” college spokesperson Jennie McCue told The Epoch Times.

“We look forward to 2022, when we will have an in-person commencement ceremony again.”

Some public school districts, including Saddleback Valley Unified School District, have said they hope to host in-person ceremonies for graduating seniors as well.